'Confused By Their Indian Surnames And Skin Colour' 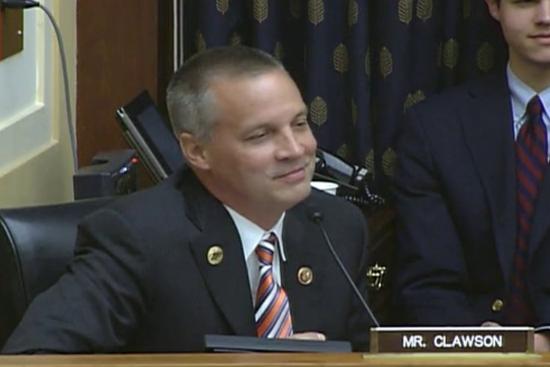 While some Indian lawmakers seem to be insisting that all Indians are Hindus, at least one important American lawmaker the other day seemed to have difficulty in accepting that some people of Indian origin could be Americans too.

The two officials, Nisha Biswal and Arun Kumar, are Americans who hold senior positions at the State Department and Commerce Department, respectively. Although both Biswal and Kumar were introduced as U.S. officials by the chairman of the Asia and Pacific subcommittee, Clawson repeatedly asked them questions about "your country" and "your government," in reference to the state of India.

Clawson was "apparently confused by their Indian surnames and skin color."

"I'm familiar with your country; I love your country," the Florida Republican said. "Anything I can do to make the relationship with India better, I'm willing and enthusiastic about doing so."

"Just as your capital is welcome here to produce good-paying jobs in the U.S., I'd like our capital to be welcome there," he said. "I ask cooperation and commitment and priority from your government in so doing. Can I have that?"

The question prompted a lengthy pause and looks of confusion from State Department and congressional staff attending the hearing.

"I think your question is to the Indian government," Biswal said. "We certainly share your sentiment, and we certainly will advocate that on behalf of the U.S."

Nisha Biswal, who is the Assistant Secretary of State for South and Central Asia, U.S. Department of State, later tweeted:

Honest mistake by new Member of Congress -but the strength & beauty of America is its diversity. Proud to represent my country & Prez Obama

Among other things, Biswal told American lawmakers that the Obama Administration is looking forward to welcoming Modi in Washington in September.

"When the President invited Prime Minister Modi and welcomed him to come to the United States, that he did so knowing that a visa would be granted for him to be able to do that, and we look forward to that.

"I think that we have always made clear for any individual that visa issues are determined on a case-by-case basis. That is not unique to the situation with the prime minister, but we look forward to welcoming (Modi)."

When Congressman George Holding pointed out that Modi was only individual ever to be denied a visa under a particular clause, Biswal said while it occurred in 2005, since then there has been no application and there has been no review or determination.

"So there has been no hypothetical basis on which to make a determination, but we have definitively said that we welcome the visit of the prime minister and therefore we don't believe that there is any further issue to be addressed with respect to that.

"The administration is very much looking ahead, looking forward and looking to the future in terms of building a very strong partnership with the Prime Minister and with his team and strengthening the relationship between the US and India. We think that we are on the path to do that."