Car Worth Rs 4 Crores Gets Totalled In 4 Seconds 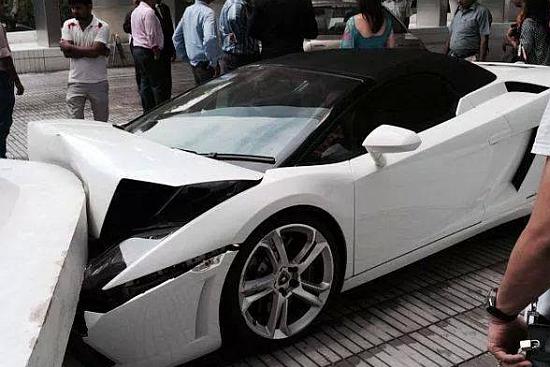 If you thought getting your car parked by a valet in a 5-star hotel is safe, think again.

On July 3 afternoon, apparently, a visitor to Delhi's 5-star hotel Le Meridian gave the keys to his car for valet-parking.

The valet took the car at the entrance. He drove to the portico, stepped out and then sat inside again. And this time, instead of the brake, he stepped on the accelerator. The car went out of control.

The car in question happened to be a Lamborghini Gallardo Spyder, worth Rs four crores or so.

And the valet had perhaps not counted on the famed pick-up speed, which can reportedly go from 0 to 320 KMPH in 3.6 seconds flat.

And about as much is what it took for the car to take off like a rocket, scattering people, ramming into an already parked sedan and then ending at a concrete wall, barely 15-metres away from where it had taken off.

The valet, apparently, had pressed on the accelerator instead of the break.

The damage is reported to be beyond repair. The owners want the hotel to keep the car and pay the cost, or get it repaired, but in its official statement the hotel is only calling it a cosmetic damage:

“An inadvertent human error resulted in cosmetic damage to the car. We are fully cooperating with the owner of the car with respect to insurance claim. The registered owner of the car is Mr Abid Fateh Mohd Khatri. Due to this inadvertent error, our driver suffered minor injuries and was provided medical assistance.”

None of the others present, miraculously, received any injuries.

The CTV footage of the incident above shows the car pulling into the porch of the hotel, where there are several other vehicles parked, with people milling around. The valet steps out for a few seconds and then gets in again as the car lurches lurches forward accelerating as it hits a parked sedan, narrowly missing at least three of the people before crashing into the concrete wall.

How Many Of These Ad Jingles Can You Identify?