Before And After Rahul Gandhi's 'Complete Nonsense' 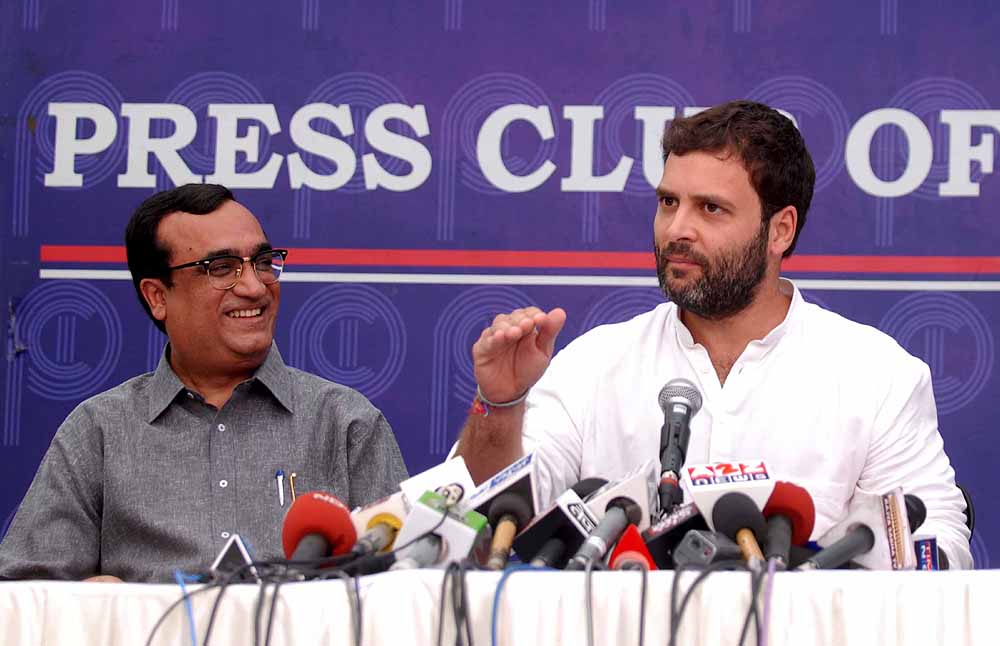 The Congress spokesperson was defending the ordinance on convicted netas in the very press conference the party VP dropped his bombshell in. The party president, silent now, was present in the core-committee meeting on Sep 21 that decided on the ordinance before it went to the cabinet

Whispers about a rethink in the Congress on the issue of the cabinet's decision to pass an ordinance overruling the SC order on the convicted netas had been apparent for some time.

First came a statement from Digvijaya Singh. A trial balloon was floated soon thereafter in the form of a 'dissenting' tweet from Milind Deora yesterday, after the spontaneous public outrage against the move

By then it was known that President Pranab Mukherjee was not too keen to give his assent to the ordinance, asking the government why the move was considered necessary.

But till today afternoon, the Congress party's official stand was to  vigorously defend the ordinance. It was for this very reason that the Congress spokesperson Ajay Maken was addressing a meet-the-press at the Press Club where he went so far as to say:

The ordinance is the collective wisdom of Congress President Sonia Gandhi, Vice President Rahul Gandhi and Prime Minister Manmohan Singh. BJP should not try and make it a political blame game and take advantage of both the situations.

It was here that Rahul Gandhi, the Congress vice-president, made a surprise appearance and dropped the bombshell:

And it is time to stop this nonsense. And I really feel that it is about time that political parties, mine and all others stop making these type of compromises.

Maken lost no time in what must have been the swiftest U-turn in recent public memory:

Rahul ji's opinion is the opinion and the line of Congress... Now Congress party is opposed to this Ordinance. The views of Congress party should always be supreme. Rahul Gandhi is our leader. His views are views of the Congress party. The situation with any issue evolves with time and it has evolved and no one should have any objection to it.

All this when senior Congress leaders insisted off-the-record that the decision to go the ordinance route was taken at the Congress core committee meeting on September 21 and the party, as well as its president Sonia Gandhi, was very much party to the decision before it went to the cabinet. This was common-knowledge which is why many were taken aback by the abruptness of this U-turn:

A senior minister says the party can "pretend" its the PMs own decision, but the ordinance was a political mandate ordered on Sep 21st

'Sonia Gandhi present at Congress core meet on Sept 21' where decision on #Ordinance on convicted netas was taken: senior minister to NDTV

The only explanation for Mr Gandhi's abrupt intervention and aggressive posturing and intemperate language seems to be that someone decided that with President Mukherjee's views known, the ordinance was doomed, perhaps this was the time to make a virtue out of a necessity.

Had Mr Gandhi offered even a modicum of humility, or taken responsibility for not having intervened earlier in what was so manifestly a shockingly shameless decision, the reaction perhaps would have been far more favourable to him.

The BJP was quick to react, calling it what it clearly was: a desperate damage control exercise.

Arun Jaitley, BJP's leader of opposition in the Rajya Sabha was first off the block:

All I can say, this is highly belated realisation of what constitutes nonsense and if the Congress party genuinely believes that this is nonsense, then the heads which have produced this nonsense twice in a month before this country... this is the question of governance... then will those heads remain or will those heads roll?

If the heads don't roll, then this is only a grandstanding, a charade... intended to only establish... well the government makes mistakes, rest of the world makes mistakes, but the first family of the Congress doesn't make mistakes.

In the last few days, there has been a national revulsion against this ordinance. Let us not forget that the subject matter of allowing the convicted politician to be a part of the legislative bodies has been approved by the UPA Cabinet twice — first as a bill and now as an ordinance.
They have not opposed it. So it is not that till today the Congress was unaware of this. And in fact, the Parliament session was extended by a day to enable this to be passed.

If a PM is undermined like he has been today, he won't even be a footnote in history. This is grandstanding by a young functionary. The PM must assess, can he continue in office now? The PM stands completely diminished. Must ask with what authority is he meeting Obama or Sharif in US now.

Enough is enough. The prime minister should quit. This (Rahul's statement) is insubordination because the manner in which it was done calling the Cabinet decision nonsense and should be torn up and thrown away. This type of blame on the government for a decision which was obviously taken in consultation with the party amounts to insubordination.

The prime minister's office issued a statement from Washington, seeking to underplay the issue, making it seem as if the Congress VP had already conveyed his view to the PM in a letter.

The Ordinance cleared by the Cabinet pertaining to the Representation of the People Act has been a matter of much public debate. The Congress Vice-President has also written to me on the issue and also made a statement. The Government is seized of all these developments. The issues raised will be considered on my return to India after due deliberations in the Cabinet.

If such a letter was written at all, no one really knows whether that was before or after the "complete nonsense" statement. As Siddharth Varadarajan, the editor in chief of the Hindu, accompanying the PM as part of the press contingent. put it in his dispatch in the Hindu:

It is not immediately known if the Prime Minister had an inkling of what Mr. Gandhi was going to do; certainly, the initial reaction of his advisers was to duck the controversy by telling reporters off the record that Dr. Singh would not comment on domestic matters while abroad. But in the face of the growing perception back home that the Prime Minister had been left holding a can that had become too politically hot for the Congress party and its leadership to handle, his statement is an attempt to treat Mr. Gandhi's remarks as just another input to be considered in due course.

The reality is that those remarks are anything but that. They have set a new line to which the Prime Minister and his government will have to conform, regardless of the intellectual gymnastics that are required to accomplish a U-turn.

Needless to say, we still do not know what the Congress president thinks about it all.

Being a good soldier of the party, I had stayed silent. I remember the earlier episode when I was the minister previously and my expressing some questions about a government decision resulted in a public rap as it was not appropriate for a minister to question the work of the government. So I kept quite. Rahul Gandhi made it clear he would very much like the government not to proceed with this ordinance.  In a matter like this, the vice president of the party is entitled to his view, the PM to his.... The two of them would come to a compromise, it so happens that they are in different continents and time zones. But certainly the PM will be taking a broad picture into account. He has been away from the country for a couple of days. He would like to take the new facts into account. I am sure that the PM would understand the spirit in which this statement has been made by Rahul Gandhi.

Finally good sense has prevailed in the Congress.

The government should have taken the step only after building consensus.

This ordinance was to protect a few individuals, morally it was completely wrong. Now Rahul Gandhi is joining the bandwagon against the ordinance - but it doesn't speak very well of the Congress. It shows no coordination between the party and the government.

We had expressed our views earlier and whatever Rahul Gandhi has said today, I think, is correct.

Now that he (Rahul) speaks about it most belatedly, this is not bad, this is good... This statement is coming to take credit.

If Prime Minister Manmohan Singh has any self respect left then I think he should call it a day because the supercop who can correct the system has arrived on the scene. All the wrong things lie on the head of the Prime Minister and all the right things go to Mrs Gandhi's share.

Definitely there are differences between the Congress party and the UPA government. No one can deny it. Now it is a welknown fact country-wide.

BJP and the Left parties had expressed their opposition on Tuesday itself when the Cabinet approved it. When Congress realised that the ordinance on convicted MPs and MLAs will not get passed in Parliament, it first asked a junior minister to oppose it, then a Chief Minister and now Rahul Gandhi.

Is this a government or a theatrical production? With such drama, the Congress will not be able to hide the government's failures.

Some of the tweets on the subject: