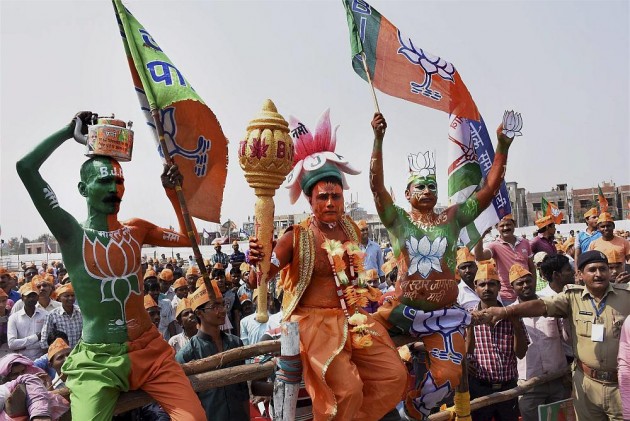 Some of the more entertaining and perceptive comments and analyses on what the Chief Election Commissioner Nasim Zaidi chose to describe as the 'mother of all elections' are seen on facebook and Twitter. Possibly the first assembly election being contested so fiercely on social media, where abuses are being traded with abandon, the discourse is also peppered with humour, sarcasm, wit and more details than traditional media can muster.

A comment over the weekend on facebook from one Rajeev Kumar, for example, read : " BJP needs to score 57 runs in seven balls ( the unwritten allusion is how close it can get)…opening batsmen Giriraj Singh and Radhamohan Singh are back in the pavilion…star batsman Narendra Modi is in the dressing room retired hurt…Jitan Ram Manjhi and Ram Vilas Paswan are batting but are unable to score…coach Amit Shah is frantically signaling to Manjhi to get out ( Hit Wicket) but Manjhi appears oblivious to the advice…BJP seems to be missing the services of Shatrughan Sinha who has been kept out of the team in the wake of charges of 'match fixing' against him…cheer leaders Smriti Irani, Sadhvi Niranjana and Sushma Swaraj are working out a sweat but their efforts are obviously not enough to influence the result…".

At the same time a BJP supporter with the unlikely name of Mukesh Singh Bernoullis posts a warning about an international conspiracy to destabilise the Modi Government. Saudi Arabia, Pakistan and the United States, he claims, have joined hands to discredit the NDA Government, according to an Intelligence Report. The foreign hands are funding writers, media houses and journalists to ensure that BJP loses Bihar, he adds before calling upon patriots to vote for BJP in the election. The facebook page of Bernoullis sports a picture of a bespectacled and earnest looking young man.

But the response he triggered was uniformly skeptical. "Mukesh, tum Burnol laga-lo; Bahut jalte ho Nitish se" (Why don't you use Burnol, the antiseptic cream for preventing infection from burn injuries, because you have such burning sensation against Nitish Kumar) quipped one Mayur Bhosle. Someone by the name of Arpit Verma commented, " Khufia reports keval aap ke paas hi kyun aata hai?" ( Why is it that you alone seem to get access to Intelligence reports ?) while Abhishek Kumar put up this tongue-in-cheek reply, "Videsh ghoomne se koi fayda hota nahin deekh raha" ( Foreign trips by the PM do not seem to be yielding any result).

It's a no-holds-barred battle in the social media with supporters on both sides matching slogans and barbs. For every cry of 'Ab Ki Baar/ BJP Sarkaar", there is one that wisecracks, "Keechad me Paon Rakhoge to Dhona Padega/ Kamal pe button dabaya to Rona padega" (If you step on mud, you will have to wash your feet and if you press on the lotus, BJP's election symbol, you will be forced to cry out in pain).

But the politician who appears to have taken to Twitter like fish to water is the redoubtable Lalu Prasad Yadav. His tweets somehow retained the earthy punchlines and one-liners he is known for, a tribute to his handlers ! The more BJP and the Prime Minister ridiculed and scorned at him, the more he appeared to revel, once tweeting sarcastically that while he was deemed to be a joker, the man who allowed prices of pulses to cross Rs 200 a Kg was deemed to be a 'Vikas Purush' ( loosely translated the Development icon).

In yet another delightful tweet, the RJD leader pointed out, " Soldiers protesting, students protesting, artists protesting, writers protesting, women protesting, farmers protesting, employees protesting, employers protesting…". Responding to the Prime Minister's boast that he had brought down the prices of petroleum, Lalu Yadav dead panned, "Petrol sasta kiya ? Log dal peeyenge ki petrol?" ( Will people 'drink' Dal or petrol ?). For a man who was whispered not too long ago of being a Trojan horse, his belligerent tweets asking BJP to disown Guru Golwalkar and RSS chief Mohan Bhagwat in the wake of the controversy over 'reservations', pushed BJP on the backfoot. Equally effective was his counter offensive in which he repeatedly asked Amit Shah to clarify why Madhya Pradesh topped the list of states in recorded incidence of rape and why BJP ruled MP had only 14% reservation for OBCs and not 27%. It's significant that he received no reply.

From the BJP camp Sushil Kumar Modi has led the attack from the front. He focused his attack mostly on the Bihar chief minister Nitish Kumar and his record of governance, fiercely questioning the latter's record in maintaining law and order, utilising central grants and failures in sectors like health and education. Modi Jr has been tweeting about the 4,500 panchayats which are said to be without high schools in the state, large number of teachers remaining vacant and so on. Lalu Yadav, he tweeted, was a disgrace and had embarrassed the state with his foul and frivolous language.

The affable BJP leader occasionally tripped when he promised the next BJP Government in the state would ban cow slaughter (it's banned in the state since 1955) or when he accused Nitish Kumar of deliberately allowing hoarding of pulses to malign the central government ( Nitish Kumar responded by asking why in that case prices had risen across the country) and when he posted a video of June, 2014 vintage in which Nitish Kumar was hugged by a Tantrik.

In the meanwhile Nitish Kumar has been measured in comparison, even subdued, limiting himself to replying to Arun Jaitley's letter on state finances and tweeting his conviction that BJP was losing ground. In one of his more aggressive tweets, the chief minister welcomed the opportunity afforded to the people to see, hear and understand the Prime Minister better at his numerous election rallies. "Because after the election, Modi Ji will not be seen again in Bihar," went the punchline.

Creating facebook pages and Twitter handles, arranging Google hangouts and interactive sessions with the leaders on social media platforms, posting charges and rejoinders—this election campaign has been like no other.