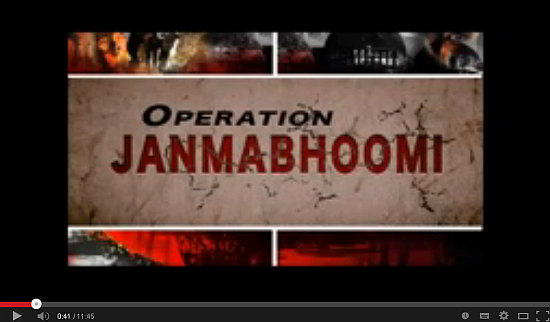 In an elaborate sting operation, codenamed Operation Janmabhoomi, Cobrapost unearths the conspiracy and exposes the conspirators behind the demolition of Babri Masjid on December 6, 1992, showing them confessing to how they laid out an elaborate plan and executed it with precision of a military operation.

The website claims that its expose establishes behind doubt that the demolition was not an act of frenzied mobs but an act of sabotage by these agents saboteurs, planned with so much secrecy that no government agency got a wind of it. After many years of investigation, the CBI has not been able to find clinching, corroborative evidence against all those 40 it has made accused in its chargesheet.

Cobrapost Associate Editor K. Ashish interviewed 23 of the leaders at the forefront of Ram Janmabhoomi movement who were involved in the demolition of Babri Masjid, either as conspirators or as executors of the conspiracy that was hatched to bring down the disputed structure.

Ashish visited Ayodhya, Faizabad, Tanda, Lucknow, Gorakhpur, Mathura and Moradabad in Uttar Pradesh, Jaipur in Rajasthan, Aurangabad and Mumbai in Maharashtra and Gwalior in Madhya Pradesh to interview these principal actors of Operation Janmabhoomi, a codename given to the plan by the conspirators themselves which Cobrapost found apt to use.

Some of the findings of the Cobrapost investigation are:

Leaders like Ramji Gupta who was put in charge of Laxman Sena claim that the army had a simple brief: Once they hear their war cry, Jai Sheshavatar, they will go all out to launch attack on Babri using the crowds as cover and would not stop till they finish the job.

As the Cobrapost investigation reveals, apart from these conspirators, there are two more persons who responsible for Babri demolition as both were keeping a close watch on the developments but did nothing.

Kalyan Singh, then chief minister of Uttar Pradesh, had a foreknowledge of what was going to happen. Mahant Ram Vilas Vedanti quite categorically claims to have conveyed it to the Chief Minister on the night before December 6:

Not only that, Sakshi Maharaj also claims to have been giving Kalyan Singh a minute-by-minute account of the developments. Yet, Kalyan Singh played a Nero.

It is also learned that at one point, Kalyan Singh had made up his mind to resign in the morning of December 6 when he came to know an assault on the disputed structure had begun. But H. V. Sheshadri and Murli Manohar Joshi persuaded him to delay it until a clean job of the mosque had been made at Ayodhya. These leaders feared that the moment he tenders his papers, President rule would be proclaimed and army would be called in, resulting in a lot of bloodletting.

The other person who has been accused of having a hand in Babri demolition is former Prime Minister P. V. Narasimha Rao. Cobrapost investigation finds these allegations true as some leaders at the forefront of the Ram Janmabhoomi movement like Vinay Katiyar, B. L. Sharma, Santosh Dubey, Sakshi Maharaj and Mahant Ram Vilas Vedanti openly acknowledge Rao’s supportive role.

There were two determined attempts on Babri, first in 1990 and then in 1992. The first attempt was foiled by the police and resulted in killing of karsevaks. However, Sakshi Maharaj, one of the frontline leaders of the movement, alleges the killings were orchestrated by vested interests in the movement who wanted human blood to give the movement a further push. Squarely blaming, Ashok Singhal for the killings, Sakshi says:

Raising again a figure at the dubious role some leaders of the movement played, Sakshi says

“Jo log mare the wo Vinay ki galti se. Galti bhi nahi wo bhagdar machi wo gali chhoti thi. Galti matlab wo bhag gaya chhodkar bhag gaya (The fellows got killed because of Vinay’s mistake. Actually, there began a stampede and the bye lane was narrow. By mistake I mean he fled the scene abandoning his group),” reminisces Bharti of the events of the day.

Such allegations add a new dimension to the Ayodhya conspiracy and raise a pertinent question with regard to the intent of its leaders: Were they using the youth as sacrificial goats?

Similarly, we find Dharmendra Singh Gurjar, another frontline leader of Bajrang Dal at that time, on the same page who questions the motive of the entire leadership of the movement:

“Ye sab bewaqoof banane wali baatein hain isiliye toh humara desh bewaqoof banta aa raha hai … pehle hum jawani ke josh mein the … junoon mein the ek junoon tha guzar gaya … logon ne upyog kiya aur chhod diya use karke (All this talk is an exercise in making a fool of people … this is why our countrymen are made a fool every now and then (by such leaders)… in those days I was being driven by the enthusiasm of youth … I was driven by plain madness … it was plain madness which has passed … people used us and threw us out after using us).”

This callous face of Hindutva and its leadership bears out in full measure when the reporter tells Mahant Avaidyanath about the plight of the old parents of Vinod Vats who was killed in karseva in 1990. Nonchalantly making light of such supreme sacrifice, the leading light of the movement says:

“Sabko marna hai tumko bhi hai mujhe bhi marna hai. Mrityu ko kaun rok sakta hai (All have to die, both you and me. Death is inevitable).” He has the same philosophy for his old, helpless parents: “Wo bhi marenge unko bhi marna hai (They will also die. They also have to die).”

The Cobrapost investigation also reestablishes the fact that the dispute arose after the statue of Ram Lala were fraudulently instated within the mosque in 1949. One of the witnesses who saw it happen is B. L. Sharma Prem. It all happened before his eyes, Sharma claims, when he was posted in Ayodhya with Military Police as a Warrant Officer. Priest Ram Chandra Das, a regular visitor to their unit, informed them how on a particular day would appear Ram Lala and requested him to bring in some friends. Debunking the theory of Devine Appearance of Ram Lala, Sharma avers: “Arre ji kahe ke prakat hone wale … prakat kiya hai … wo toh maharaji ka kaam tha na Ram Chandra Paramhans (How would He (Ram Lala) appear? He was made to appear … It was the handiwork of Maharaj Ram Chandra Paramhans).”