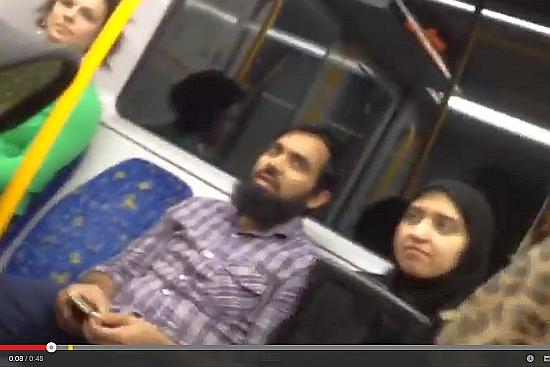 An Australian woman, aboard a train in Sydney, stood up for a Muslim woman who was allegedly being harassed for wearing a hijab.

A report in the Independent says:

Stacey Eden claimed an older woman was accusing the unidentified Muslim woman and the man sat next to her of being an Isis supporter because she was wearing a hijab.

Ms Eden, from Sydney, said the alleged tirade began "a good ten minutes" before she started filming the woman, later uploading the video on to her Facebook page.

The footage shows the older woman who has not been named so far, sitting opposite to the Muslim woman on the train, asking "why do you wear it [a hijab] for a man that marries a six year-old girl?"

The couple chose to remain silent but Eden responded: "She wears it for herself, OK? She wears it because she wants to be modest with her body, not because of people like you who are going to sit there and disrespect her."

The older woman continued: :Your kids behead people in Syria. […] Read the newspapers, 148 people, Christians murdered in Kenya. They’re killing each other in Syria."

Eden interrupted again at this point, telling her angrily: "Don't sit there disrespecting someone that has nothing to do with it. Have some respect. If you've got nothing nice to say, don't say anything."

The video has gone viral and Stacey Eden has been praised for raising her voice against Islamophobia and racism.

In December 2014, after several people were taken hostage by an armed man at a popular cafe in Sydney and forced to display an Islamic flag, Australians had come up with a heart warming reaction on social media in the face of adversity.

In a show of solidarity against a possible racist backlash on the Muslim community in Australia, #illridewithyou started as a movement to protect Muslims against Islamophobia.