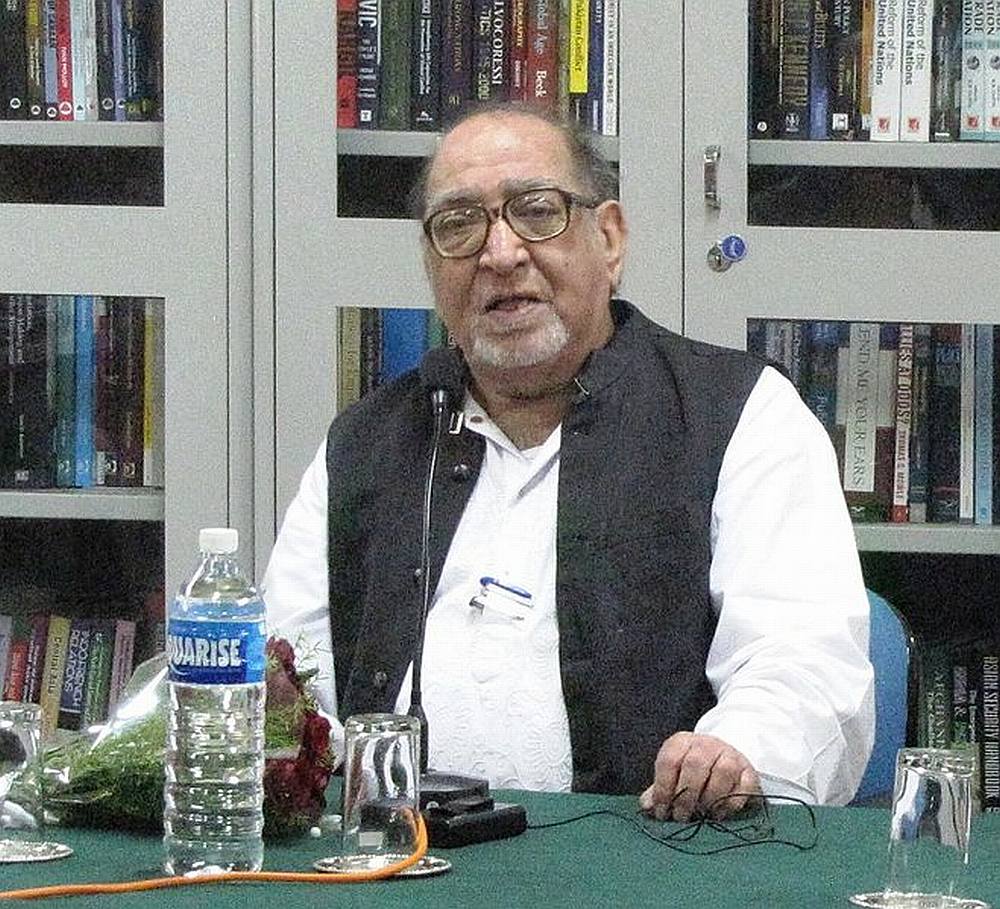 Asghar Ali Engineer's son, Irfan explained why his funeral took place at the Sunni Muslim graveyard in Santa Cruz (W) in accordance with the scholar's wish:

"Most of his friends, like Ali Sardar Jafri, Kaifi Azmi, Majrooh Sultanpuri and K A Abbas, are buried there and he, too, wanted to be buried thereS. ecuring a place for him at a Bohra cemetery might have been tough as he was excommunicated in the 1970s for launching the anti-Bohra-priest, reformist movement."

Jyoti Punwani in the Mumbai Mirror: There will never be another Asghar Ali

Engineer was a brave man. Assaulted six times, twice almost fatally, by orthodox Bohras, simply for fighting constitutionally against the absolute hold of the Syedna over the community, it would have been easy for him to give up a fight he began openly in 1973, with an article in The Times of India. The social boycott against him declared by the Bohra clergy cut him off for years from his family, including his mother, and in his words, "almost drove (me) mad".

The political establishment, all the way up to Indira Gandhi and Vajpayee, stood solidly behind the Syedna. Yet, Engineer remained a Reformist throughout, and not just in his personal life. Under his guidance, the Reformists became a force to reckon with, with women at the forefront of the movement. He showed the same courage in openly organising support for the Shahbano judgment, when the Muslim establishment mounted a campaign against it.

Mohammed Wajihuddin in the Times of India: Engineer of Islamic reform dead

Though a civil engineer who briefly worked in the BMC sewage and garbage disposal department, it is the swords that Engineer often crossed with conservatives among Muslims and communally divisive Hindus alike that earned him accolades. For his reformist views, he even had to brave a few bids on his life.

Son of an aamil (a maulvi who represents the Dawoodi Bohra spiritual head), Engineer never fitted into the stereotype of a traditional Muslim scholar. "He was among the few Muslim men who wrote passionately about Muslim women. He doggedly fought for the rights Islam provides to women but which the conservative clergy have denied them," said Islamic scholar Zeenat Shaukat Ali, who knew Engineer ever since her days as a college student.

The latest work by Engineer is his draft document on the codification of Muslim personal law which he wanted to push forward despite resistance from conservative ulema.

He studied, wrote and spoke forcefully against a series of communal riots, beginning with the first riot he probed in Jabalpur in 1961. "In his death we have lost not just an enlightened Islamic scholar, but also a strong voice of civil society," said Professor Akhtarul Wasey of Jamia Millia Islamia.

Meena Modi, in the Hindu: Crusader against Communalism:

As a child in Wardha at the time of Partition, Asghar Ali heard “horrible stories of people being killed and trains full of dead bodies.” Those stories, he wrote in his autobiography, A Living Faith , disturbed him so much that he began thinking very early in his life about why people killed each other in the name of religion.

Then, as a student in 1961, he was deeply affected by the riots in Jabalpur, the worst till then in independent India. For Engineer, those riots were the beginning of his lifelong battle against the pathology of communalism and the engagement with creating interfaith harmony.

Mushirul Hasan in Tehelka: ‘Asghar Ali will be remembered as a creative interpreter of Islam’

He was a man of extraordinary energy and unshakable conviction. Above all, he was on a mission to reform his own Bohra community, to expose the menace of communalism and to plead for a liberal and modernist version of Islam. What is amazing is that he actually believed that these changes would take place during his lifetime. Sadly, that did not happen...

...In a career spanning over four decades, Asghar Ali spearheaded many important movements. He was in the forefront of anti-communal movements, upholding the spirit of our secular constitution. Global peace and interfaith dialogue was lately, his principal passion. He tried to work out a synthesis between different religions, traditions and underline their commonalities. In this respect, his dialogues with Christian and Hindu priests are quite important. It marked an advance on a tradition pioneered by social reformers like Raja Ram Mohan Roy, Sir Syed Ahmed Khan and Mahatma Gandhi.

Soon after the release of his autobiography, A Living Faith: A Quest for Peace, Harmony and Social Change, in 2011, in an interview to Mint, Asghar Ali Engineer said: We had a Sir Syed, we need an Ambedkar:

I am the son of a priest. I was brought up in a very orthodox atmosphere, and studied Arabic, Persian, began to study Quran. I was very rigid in interpreting Islam, but I had non-Muslim friends, and always thought of mercy and justice as important values. So when communal riots took place in Jabalpur in 1961, when I was studying engineering in Indore, I was seriously disturbed and decided to investigate. I came to understand that it was a clash of interests, not of religions, that led to violence. All the subsequent riots which I investigated confirmed my conclusion. I came over to Mumbai in 1962, and it became my mission in life that communal harmony should prevail...

I believe we have to revise our understanding of the Quran. I divide all religious scriptures into what I call contextual and normative parts. The values of the scripture, which are normative, remain constant and universal. But because rituals are specific, if you want to be known as Muslim or Hindu or Christian or Buddhist or Jain, it is possible only through rituals, not through values alone. The contextual interpretations of scriptures must be subject to change.
So there are definitely contextual statements in the Quran, though its values are permanent. It talks, for example, of gender equality, but this was never accepted in practice by Muslims because of their patriarchal or feudal societies, in which gender equality was unthinkable. We often mix culture with religious thinking, which is what many attacking Islam confuse.

Muslims produced a Sir Syed (Ahmed Khan, who established the Aligarh Muslim University in 1875). Sir Syed’s main thrust was for zamindars and the children of zamindars. Ambedkar worked for the poorest of the poor. I say Muslims now need to produce an Ambedkar.

As he told Farzana Varsey in an interview: The Reformist as Pacifist: Asghar Ali Engineer’s Islam

FV: Islam has this macho image. I suspect it is because there is no idol worship. Without something tangible to submit to, can the gun not become a potent idol for some?

AE: “I would not agree with you at all. Those who take to guns could do so due to deprivation, suppression, or historical legacy. The Afghans have lived through violence for centuries, by the Mughals, the Russians, their own people, so they have always had to fight for freedom…we cannot take away the context. But they legitimised it by using jihad, a religious sanction, so they could be seen as mujahids, fighting for Allah. And you cannot say there is nothing concrete. Muslims going to mausoleums have created a concrete concept. An abstract god may be difficult so they found alternatives. My personal belief is we should not bow to any object. But Islam was aware of this human weakness and fulfilled that need through Haj to kiss a stone. A stone is a stone but the vacuum was filled and it became the holiest object. I have performed Haj and seen the devotion of people braving stampedes only to kiss that stone.”

Each time he spoke out, the more he isolated himself but this never bothered him. Part of what made him so unique was that he never saw himself as part of a community. He believed this was the surest way to stifle your voice. Be independent, he always told me.

After I witnessed the Gujarat riots, we met on a few occasions. But he never liked hearing my stories from Ahmedabad. It was not that he was not interested but he did not want it to rattle his core belief that humans are inclined towards goodness and reason, two things he saw lacking during the 2002 carnage.

We ended up growing apart because he was so ideal about India and religion that that idealism which I always saw as his virtue I began to see as his blind spot. But I always appreciated how he never gave up and more importantly, how he was always re-examining his beliefs.

The last time we corresponded was in 2005. It was a few months after Modi was denied a visa and I was active in Washington DC in raising awareness about Gujarat. But I was burned out and frustrated by my fellow Indian Americans who could not be bothered with what happens in India. What I wanted, I told him, was more support, more people to stand with me.

I Had A Double Mastectomy: Angelina Jolie