Midway through Manmohan Desai’s classic 1977 film about three brothers separated in childhood, a man in a top hat and a Saturday Night Fever suit leaps out of a giant Easter egg to inform the assemblage, “My name is Anthony Gonsalves.”

The significance of the announcement was lost under the impact of Amitabh Bachchan’s sartorial exuberance. But decades later, the memory of that moment still sends shivers down the spines of scores of ageing men scattered across Bombay and Goa. By invoking the name of his violin teacher in that tune in Amar Akbar Anthony, the composer Pyarelal had finally validated the lives of scores of Goan Catholic musicians whose working years had been illuminated by the flicker of images dancing across white screens in airless sound studios, even as acknowledgement of their talent whizzed by in the flash of small-type credit titles.... 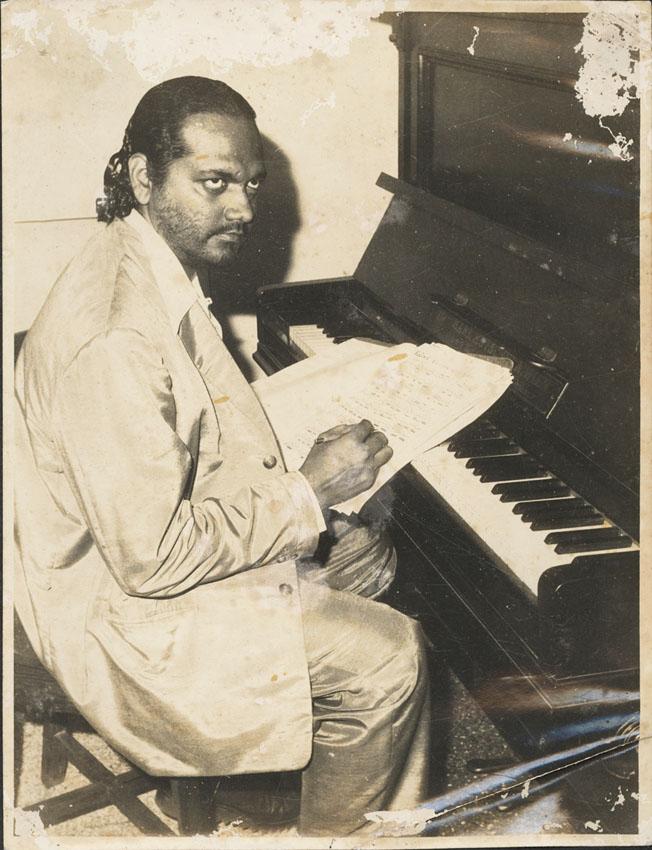 Anthony Prabhu Gonsalves was born in 1927 in the coastal village of Majorda in south Goa. His father, Jose Antonio Gonsalves, was a choirmaster at Majorda’s Mãe de Deus church.  As Vivek Menezes pointed out in an article in Himal some time back, he came from the Indian tradition that

was already well established hundreds of years before the sitar was invented or tablas made an appearance in what would much later become enshrined as Hindustani music. Wrong-headed nationalists like to trumpet the credentials of the music that emerged from post-Mughal North India as somehow more ‘Indian’ than, say, a violin concerto. But this is an absurd and ahistorical argument, completely ignorant of the history of India’s Western coastline...

In his Seminar article, Naresh Fernandes goes on to narrate how Anthony Gonsalves travelled to Bombay in 1943, already a seasoned musician at 16:

He had been recognised as a child prodigy and appointed choir master at a local church at age 12. He found his first job in the city as a violinist in the group of the composer Naushad in 1943. His talent was overwhelmingly apparent and he soon graduated to doing arrangements for composers around the city. He was also a highly prized teacher..

Every Sunday, his apartment at Sushila Sadan on Bandra’s Linking Road was thrown open to eager students, two of whom – R.D. Burman and Pyarelal – would become significant composers themselves. Unlike many of his Goan peers, whose western-trained ears couldn’t quite wrap themselves around the sinuous lines of Hindustani tunes (though they could play them well enough from a score), Gonsalves developed a deep passion for raga-based music. ‘It struck me very hard in my heart and my mind,’ he explained. ‘Melodically and rhythmically it is so rich.’

When other musicians went off for a smoke between takes, he’d engage in jugalbandi call-and-answer jam sessions with the flautist Pannalal Ghosh. He sought out Pandit Ram Narayan, Pandit Shyam Sunder and Ustad Inam Ali Khan to deepen his knowledge of the tradition. Soon, he was trying to find ways to meld the two systems. After a hard day in the studios, he would spend his nights committing to paper the fantasies in his head. It wasn’t easy. ‘A raga isn’t like a ladder, on which you take one step at time,’ he told me. ‘It’s like a path up the mountain. It winds more and there are unusual intervals between stages.’

—Read on at Seminar; Remembering Anthony Gonsalve by Naresh Fernandes

He was a fixture in the orchestras of musicians of the likes of Pankaj Mullick, SD Burman, Khyyam, Khemchand Prakash, Madan Mohan and many more, where he merged the symphonies of his Goan heritage with Hindustani music.

And Ayega aaanewala in Mahal :

An acknowledged musical genius, Gonsalves developed an abiding love for raga-based music. He immersed himself in creating symphonic music based on Indian classical traditions, and wrote several pioneering pieces of music in this vein, including ‘Sonatina Indiana’ and ‘Concerto in Raag Sarang’. In 1958, Gonsalves footed the bill to constitute 110 musicians into the Indian Symphony Orchestra, who made their debut in the quadrangle of St Xaviers College in South Bombay.

The photographs from that day are extremely impressive, but also heart-breaking when seen in hindsight. A hundred and ten beautifully dressed Indian musicians playing symphonic music with tremendous gusto, with an impossibly young-looking Lata Mangeshkar and Manna Dey singing along with great intensity. Standing majestically atop his lectern, baton in action, Gonsalves is poised and leonine. He looks very, very happy. But that is where the story ends, with a giant door slammed on the future of symphonic music in India. Nationalistic paranoia held that Goan musicians such as Gonsalves were suspect because they had ‘foreign names’ and played ‘foreign music’. Walt Disney instead came calling for this brilliant composer, and asked him to score a movie for them with Indian governmental involvement. But ministerial clearance never came: Gonsalves has often repeated the story of the day that the information minister told him point-blank that ‘Christian musicians cannot represent India.’

—Read on at Himal: Indigenous symphonies by Vivek Menezes] 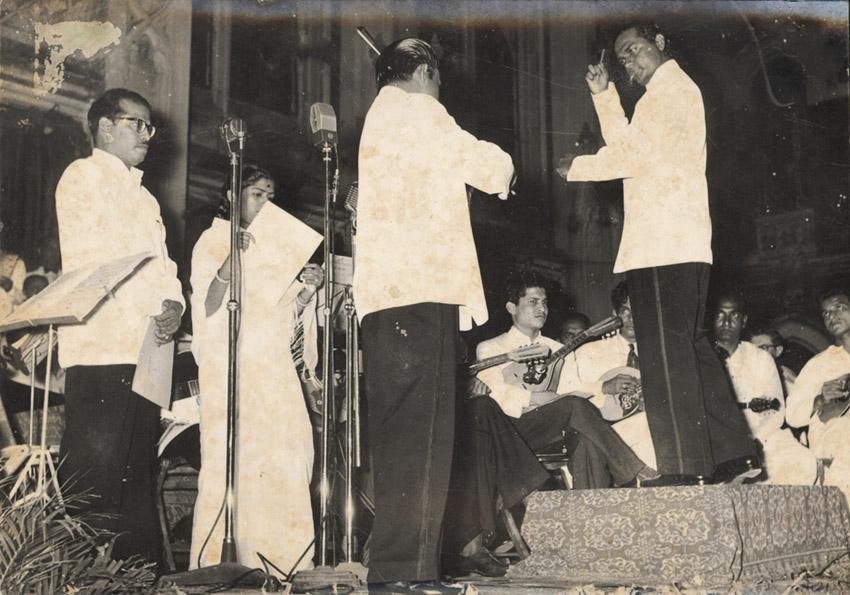 Rajan Parrikar, from whose excellent photoblog these photos above are taken, has an account of his meetings with Mr Gonsalves in 2008, and some additional, characteristically wonderful photos. It also has audio of a conversation with him about the episode involving the then minister of Information and Broadcasting, B.V. Keskar. Mr Parrikar recounts the later years:

In 1965 Anthony left for Syracuse, New York, and joined the music department at the university. His son Kiran and daughter Laxmi were born there. In the early 1970s, he came back to India and retired to a quiet life in his ancestral village of Majorda. He never again worked in the music industry. All the symphonies and orchestral scores he wrote and conducted in his prime lie stashed away in an old rusty trunk. The musical works carry names like Symphony in Raga Multani and are a testament to his abiding love of Indian Classical Music. He still hopes that someday they will be revived and replayed.

I met Anthony-bab several times in 2008, and during one of our sessions recorded an extended conversation with him. He spoke about his experiences with the great music makers of yesteryear – Khemchand Prakash, Anil Biswas, Naushad, S.D. Burman, Salil Chaudhary, K.L. Saigal, Lata Mangeshkar, and many others. He cited some of the major scores he had written, such as for the movie JAAL (S.D. Burman), DO BIGHA ZAMEEN (Salil Chaudhary), and so on.  [click here for an excerpt of that conversation]

—Read on at Rajan Parrikar's PhotoBlog: My Name Is Anthony Gonsalves