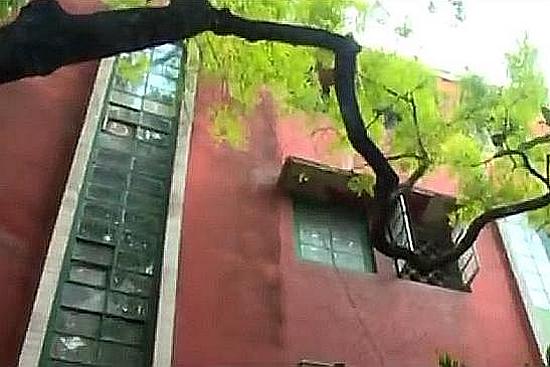 What if stuff written in a book almost two decades back came to haunt the present? What if a house which was the centre-stage of action in a work of fiction became a witness to mysterious occurences twenty years later? Except this time as fact, which more often than not is stranger than fiction.

Shading his eyes, he threw a glance diagonally across at number three Robinson Street. He caught a brief gliumpse of a large, old-fashioned colonial mansion, within high walls and surrounded by ornamental palms. He noticed that the front of the house was covered with bamboo scaffolding and that the driveway was littered with piles of bricks and cement....

All he could see of the mansion was the high wall, plastered with handbills and painted slogans; the brilliance of the surrounding lights seemed to have deepended the shadows around the compound. Going over to the steel gates, he sae that they were fastened by a heavy chain. He banged on the gates, just in case there was a watchman inside to let him in. There was no answer. Stepping back, Murugan looked up at the mansion's looming sillouhette; it was much more imposing close up than he had expected.

Suddenly there was a power cut and the light went out, all the way down the street. There followed an instant of absolute stillness; everything seemed to go quiet, except the chirruping of the cicadas in the nearby trees and the trumpeting of conches in the far distance. In that instant Murugan heard the soft bell-like ringing of metallic cymbals, somewhere within the mansion. He looked up, at the shuttered windows above, and saw a flikering, orange rectange materialize in the darkness.

Amitav Ghosh's The Calcutta Chromosome was published in 1995. Loosely based on the life and times of Sir Ronald Ross, the Nobel Prize-winning scientist who achieved a breakthrough in malaria research in 1898, the novel revolves around Antar who discovers the battered I.D. card of a long-lost acquaintance — L. Murugan — a man obsessed with the medical history of malaria and of course, Ronald Ross.

The framework of the novel is entirely factual even though the events are fictional and Ghosh draws upon Ronal Ross' Memoirs which were published in 1923.

According to the book, Sir Ronald Ross stayed at House no 3 on Robinson Street.

A report in the Firstpost:

On 11 June, the Kolkata Police arrived at the doorstep of a house in Central Kolkata as locals alerted them about thick smoke emanating from one of the windows. They weren't exactly prepared for what they stumbled upon after they broke into the house.

If this hasn't spooked you out a little, here is something else.

In 2011, a Ghosh fan went in search of the Ronald Ross trail and even blogged about it:

Luckily the first lane that we went into was called, what else but Robinson Street. We hurriedly went on to find number 3, the house Ross lived in. Number 3 really existed, though it was now someone else’s house. Some Dey is the present owner of the house.