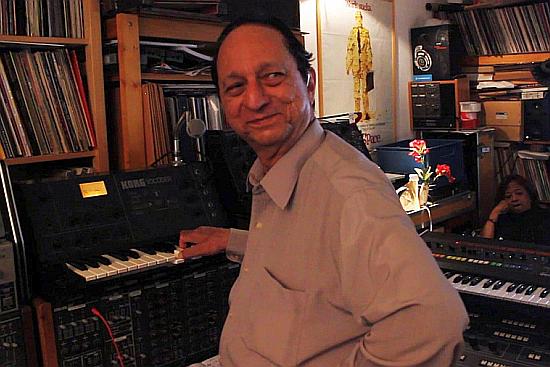 In 1982, veteran Bollywood composer Charanjit Singh got his hands on a Roland 303, 808, and Jupiter 8 and used them to compose the core of acid house and arguably the precursor to electronica as we know it today, albeit unintentionally.

But he did it four years before the clubs of Detroit, Chicago, and Manchester started doing it.

Later that year, EMI India released an album limited to a few thousand copies: "Synthesizing: Ten Ragas To A Disco Beat". It presented Charanjit's effort at using what was then entirely new technology to bridge the gap between programmed beats, synth lines, and classical Indian music motifs.

It essentially sank without a trace.

In 2010, Dutch label Bombay Connection re-released the LP to an unsuspecting and wholly ignorant public, one convinced that these beats were established in the clubs of Chicago, Detroit, and Manchester in the mid to late eighties.

In its obituary, the Guardian writes:

Charanjit Singh's back catalogue could have disappeared into musical obscurity were it not for the cult album Ten Ragas to a Disco Beat that he created in a few days in Mumbai in 1982. The album is one of the earliest records to use the legendary Roland TB 303 synth – a machine synonymous with the acid house sound – and Singh paired this with the equally renowned Roland TR 808 to create an album astonishingly unusual and ahead of its time. So far ahead, in fact, that it appears to pre-date the first acid house records to come out of Chicago by about five years.

In 1987, the Chicago acid house trio Phuture released their classic "Acid Tracks," catalyzing the acid house movement and firmly putting a name on the genre Singh accidentally helped create. While there was no connection between Singh and the Chicago scene that helped spread acid house, Singh was later regarded as an unintentional pioneer in a field that later bore acts like 808 State and Aphex Twin.

For tracks that were first put to use as program interludes on All India Radio, Singh’s debut gained attention only 30 years later, after its re-release. After all the ghazal performances with Suparna by his side, he got a taste of the world of electronica in November 2012, with his first set of shows performing Disco Raga in the UK, Holland, Sweden and Belgium. He doesn’t listen to the current crop of electronica, but does know it is more advanced. Said Singh, who recorded Synthesizing: Ten Ragas to a Disco Beat on bass synthesizers that later become synonymous with acid house, "Current music is much more advanced. I’m using the same instruments what I recorded on in 82."

The Boy Who Received The First Rabies Shot