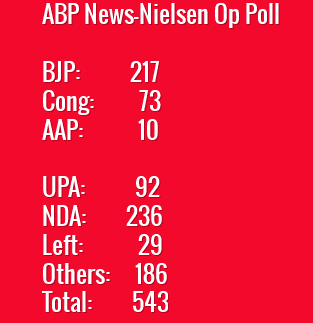 BJP is likely to emerge as the single largest party with 217 seats and NDA with 236 in the 2014 Lok Sabha polls, predicts an opinion poll conducted by ABP News-Nielsen. Congress will be confined to 73 seats and Kejriwal's AAP is likely to get around 10 seats.

NDA has gained 10 seats as compared to the opinion poll conducted in January, 2014.

NDA is predicted to get a vote share of 46 per cent from Western India and around 38 per cent vote share in northern India.

As per the opinion poll, the non-UPA, others will have around 186 seats.

According to the ABP News-Nielsen opinion poll, inflation emerges as the issue which affects people the most in their day to day life with 46% respondents saying so. According to 34 per cent respondents corruption is the biggest problem and 18 per cent feel unemployment is a major problem.

According to the ABP News-Nielsen opinion poll, UPA would lead marginally over NDA with 26 seats in southern India. Congress is predicted to get 23, and BJP is likely to get 20 seats in South.

As per the ABP News-Nielsen opinion poll, NDA to lead with 39 seats, BJP likely to get 30 seats and Congress predicted to get around 18 seats in Eastern India.

The opinion poll was conducted by ABP News- Nielsen in 129 constituencies with 29,252 respondents during 4th February to 15th February 2014

'Confession Of The Sexual Abuser'