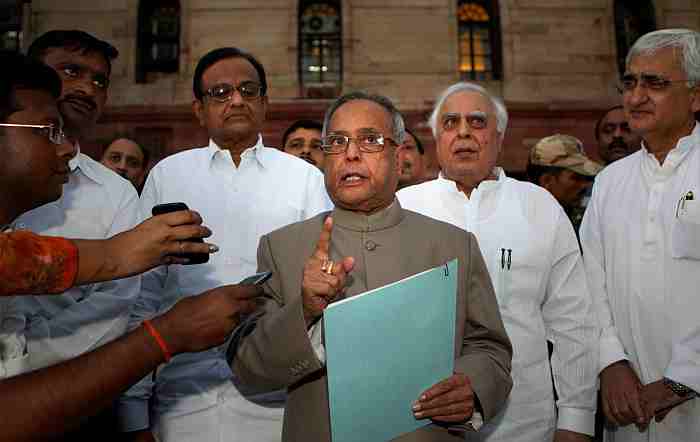 So what purpose was today's farce of a joint press-appearance by two sparring ministers Mr P.Chidambaram and Mr Pranab Mukherjee supposed to serve?

Perhaps it was only to provide a face-saver to the former who had been sulking since Sep 21 when the controversial 'inter-ministerial background paper' was made public and to present a facade of unity for the cameras.

Mr Mukherjee has been blamed by many for having diluted his position, so it's important to pay attention to what he said today:

A number of stories on 2G Spectrum had appeared in the media in January 2011. A view was taken that a harmonized note based on facts should be produced for use by various representatives of the Government. A group of officers prepared an inter-ministerial background paper which was sent to PMO on 25th march 2011.

Apart from the factual background, the paper contains certain inferences and interpretations which do not reflect my views.

If anything, Mr Chidambaram's response — "I am happy with the statement made by my senior and distinguished colleague, the finance minister Shri Pranab Mukherjee. I accept the statement. As far as all of us in government are concerned, the matter is closed" — only confirmed the rift that the Congress and UPA spokespersons and even the PM had been denying and dismissing as rumours spread by opposition through the last eight days.

The one-line, second paragraph in Mr Mukherjee's statement is what matters. All that he has said in his suitably vague way is that this inter-ministerial background paper 'contains certain inferences and interpretations which do not reflect [his] views' — it is not specified what they are or whether they are untenable or even that he thinks they should not have been included.

Besides, he is only reiterating what had been said earlier on his ministry's behalf: that various ministries and departments, including the PMO and the cabinet secretariat were involved in the preparation of this 'background paper' — and such collective work, spread over many meetings and leaving behind a trail of documentation and emails, cannot just be wished away.

Being an old political player, Mr Mukherjee has even managed to slip in the bit about the policy of the government in 2007-2008 being a "continuation of the policy adopted in October 2003 and as reiterated by TRAI". This is significant, for this in fact implicitly reiterates that the then finance minister was jointly responsible, along with the telecom minister.

So why is it that after eight days of confabulations and meetings and trying to hammer out a statement, this is the best the UPA managers could come out with? And is this what Mr Chidambaram wanted?

The answer is simple: No matter what Mr Mukherjee thinks of Mr Chidambaram, or vice versa, both of them, including the rest of top Congress leadership, realise that the government would not be able to survive the loss of an additional minister to the 2G scam, and that too someone as senior as Mr Chidambaram. The next in line to be targeted would certainly be the Prime Minister himself who has wanted to stay at 'an arm's length"  and not take any responsibility for all that has happened under his watch. And of course there is the small matter of the cabinet's collective responsibility and the rules of executive business.

Mr Chidambaram too perhaps realised that this was the best that Mr Mukherjee was willing to do and that's why the expression of happiness at —and acceptance of — the statement of his "senior, distinguished colleague." It is a different matter altogether that both he and Mr Mukherjee looked anything but happy. If anything, the body language says it all.

Mr Chidambaram might want to convey that the matter is now closed, but it certainly remains open for the court and the two parliamentary committees — the PAC or the JPC —examining the 2G scam as well as for the Congress president.

Today's farce would be a non-event for the court, for the court is certainly not interested in the relationship between UPA's top two ministers and would confine itself to the contents of the "background paper".

The fact that the government finds itself in a mess is largely because it has not thought it through or even spoken in one voice on whether it supports the non-auction and first-cum-first-serve sale of Spectrum adopted by Mr Raja or whether it thinks that Mr Raja was wrong in so doing. As Mr Harish Salve put it in one of the discussions, the government's response is most perplexing — it is like the police insisting that there's been a theft in the house (the government's investigative arm, the CBI, is prosecuting Mr A. Raja for causing a loss to the exchequer of, according to it, Rs 30,000 crores) and the members of the house denying any theft (Kapil Sibal's claim of zero loss).

Going by Mr Mukherjee's last line, it is obvious that the government's defence is going to be to stick to its earlier articulated position of no revenue loss because of policy and that Mr Raja's crime was in implementation. But the question that arises then is: If this is what the government policy was, why is the inter-ministerial background paper suggesting that Mr Chidambaram could have stuck to the stand of auctioning?

Leaving all that aside, which is bound to be taken up by the Supreme Court, one of the biggest fall-outs of this sorry saga is that with Mr Pranab Mukherjee disowning political responsibility for the Office Memorandum sent out by his ministry, the bureaucrat concerned has been left holding the can. As a result of the ministers not providing cover, more and more bureaucrats are going to fight shy of articulating their opinions freely.