It was Shabana Azmi birthday recently, and the buzz came from none other than @SrBachchan on Twitter in a series of tweets:

The last Tweet elicited a response from someone called @sptwtps who asked:

@sptwtps @SrBachchan. social respo shouldn't cost our sense of humour. We should be able to once in a while laugh at ourselves.
12:53 AM Sep 20th via Twitter for BlackBerry® in reply to sptwtps

@sptwtps. Give me any joke & I'll tell why it is politically incorrect. homour always takes liberty.its the intention that counts.
9:20 AM Sep 20th via Twitter for BlackBerry® in reply to sptwtps 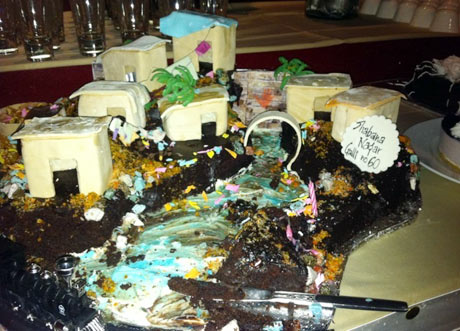 But soon, there was international outrage at this poverty-porn, via Parvez Sharma, writing for the Guardian of London's Comment is Free, taking a bite of the slumcake (providing a photo as well), who posed some simple questions of  "the Bollywood elite, who dutifully showed up and no doubt ate big chunks from the makeshift huts and open sewage drains:

I wonder, if they are aware of India's latest poverty statistics. I am sure the cake, like the rest of the food on offer, was delicious.

The missile seemed clearly to be aimed at the hypocrisy of the original, shall we say, tweetiya in this case. But as we write, Javed Akhtar is valiantly trying to explain on Twitter, inter alia:

We who know her dedication for this cause often make fun of her in good humour.if someone doesn't want to understand this , so be it. about 8 hours ago via Twitter for BlackBerry®

Those who ,given half a chance sit on a high horse or start beatig the pulpit,must introspect . are they selflessly working for any cause.     about 8 hours ago  via Twitter for BlackBerry®

you may find a joke not in good taste but if you know that the intention was not wicked will you Still make it an issue or ignore it.     13 minutes ago  via Twitter for BlackBerry®

@RajeshJoshi humour is always irreverent. Each and every joke under the sun can be called politically incorrect.so shall we ban humour.?

We were actually ignoring it thus far, but now that it has become an issue, tell us what you think.