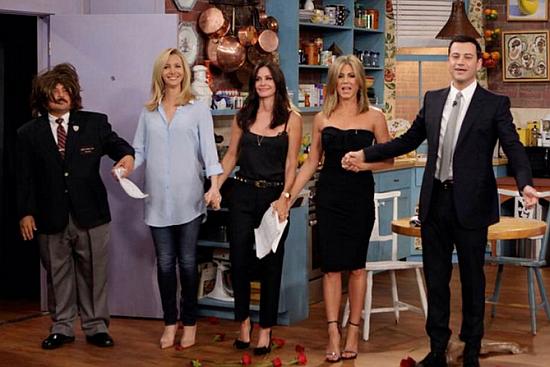 A Friends Reunion? "It's not gonna happen," Courteney Cox told David Letterman in April this year, and yet there she was last night, appearing with her other two female co-stars, Jennifer Aniston and Lisa Kudrow, doing a five-minute take-off on Jimmy Kimmel Live.

The 90s stars, who played the popular roles of Monica, Rachel and Phoebe respectively, appeared together briefly to take bows as the short sketch ended, in which the absence of Matthew Perry and Matt LeBlanc, who played Chandler and Joey, was glibly explained away in these words:  “Marcel the monkey bit them and gave them monkey rabies, and they died.”

Long time Friends watchers of course would not need to be reminded that Marcel was Ross’ pet monkey in the popular show.

The reunion of sorts was made to appear as a surprise for Jennifer Aniston who was appearing on Jimmy Kimmel's show as a guest.

Kimmel said he wished to act out some of his own “fan fiction” with Aniston, as the live audience and the viewers were sprung a surprise with his unveiling an exact replica of the famous Friends kitchen. “I spent $80,000 making it. To the tee, every detail is correct.”

In the skit, Kimmel wanted Aniston to act out a script he had written, which largely revolved around Ross (as played by Kimmel, of course) and his love-making prowess, with all three having to spout lines such as "You are really good at it."

JA: “This is really dumb”

JK: “Is it dumber than living in a huge apartment in New York City for eight years even though you work in a coffee shop?”

The 20th anniversary of Friends’ is scheduled to premiere next month.