A Beautiful Turn For Mr Q

So said a Dehi judge before pronouncing the verdict in the Bofors case today.

That Chief Metropolitan Magistrate Vinod Yadav wrongly attributed the lines to Majrooh Sultanpuri was perhaps the least important bit in what he went on to say.

The magistrate then read out relevant paragraphs of his 73-page order saying Italian businessman Ottavio Quattrocchi was discharged as the country could not afford to spend hard-earned money on his extradition which had already cost Rs250 crore.

And why was the logical conclusion of the case not possible? 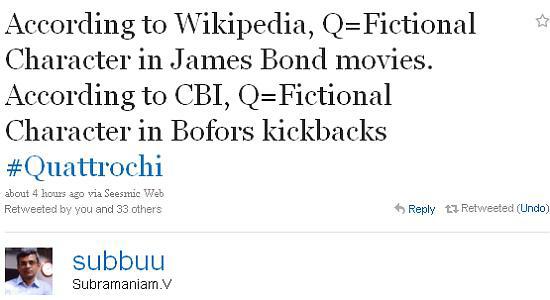 How was this allowed to happen?

We should perhaps ask, among very many others, a former law minister who had already done the needful to earn his sinecure for sitting in a Raj Bhavan and delivering homilies on corruption and probity today.

Would some judge be singing the same song on 2G 25 years later?