Get real with unpredictability

If you are a more-than-casual market watcher, the recent volatility in the stock market indices would have brought its share of anxiety and worry. Yes, 2015 ended with the Sensex in the red, and the first few weeks into 2016 resulted in several soothsayers predicting this year to be another 2008—a meltdown. It is a different matter that several of these predictors also professed that 2016 will be a year of stupendous returns and the Sensex will scale 30,000 and beyond!

The probability of Sensex ending 2016 on a positive note is pretty high going by the historical data—since 1980, there have been just two instances when the Sensex has been in red for two consecutive years, 1987-1988 and 2001-2002. My belief in the context of markets and investments is that all attempts at quantifying and predicting returns are useless, especially when we are unable to predict risks. None of the so-called experts were able to see a prolonged phase when oil price would fall and hover at $30 and even lower. They could not predict the commodity price bust, just the way they were not able to predict the gold price fall.

One should read Nassim Nicholas Taleb’s books – ‘Fooled by Randomness’, ‘Black Swan’ and ‘Antifragile’. All these three books have disorder as the theme and revolve around unpredictable events and how these events leave a significant mark on people and history. And, as Taleb points out, these ‘Black Swan’ events are truly random and unforeseeable but their impact is so large that they are the ones that really drive history. So, you hear phrases like irrational exuberance, decoupling, global cues, Black Swan and more. 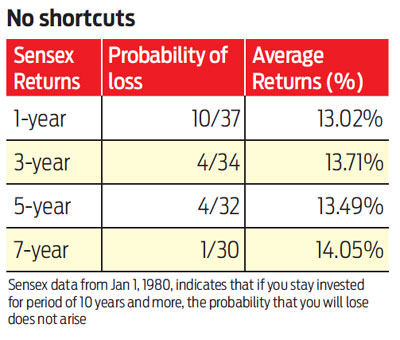 Today, if you view a stock market oriented TV channel you will come across a band of experts throwing innuendos on which way the markets will head, only to retract some hours later summing up why something happened the way it did. These analysts are not alone; you have bankers, bureaucrats and now even politicians decked up in long woollen coats professing the shape of global markets from Davos.

Sadly, none of them have any accountability and I don’t know if they have their skin in the game.

The reality around us is that we live in unpredictable times where stock markets will be volatile and small savings will pay less. You are more or less better off fending for yourself. As a first step, map your financial needs on a time scale with money that you need for the next 2-3 years in fixed income instruments. Anything that you do not need for more than three years should strictly go into equities. Make use of systematic investment plans (SIPs) to do so in a portfolio of 3-4 funds, for it is one strategy that has been tested and works in the long run.