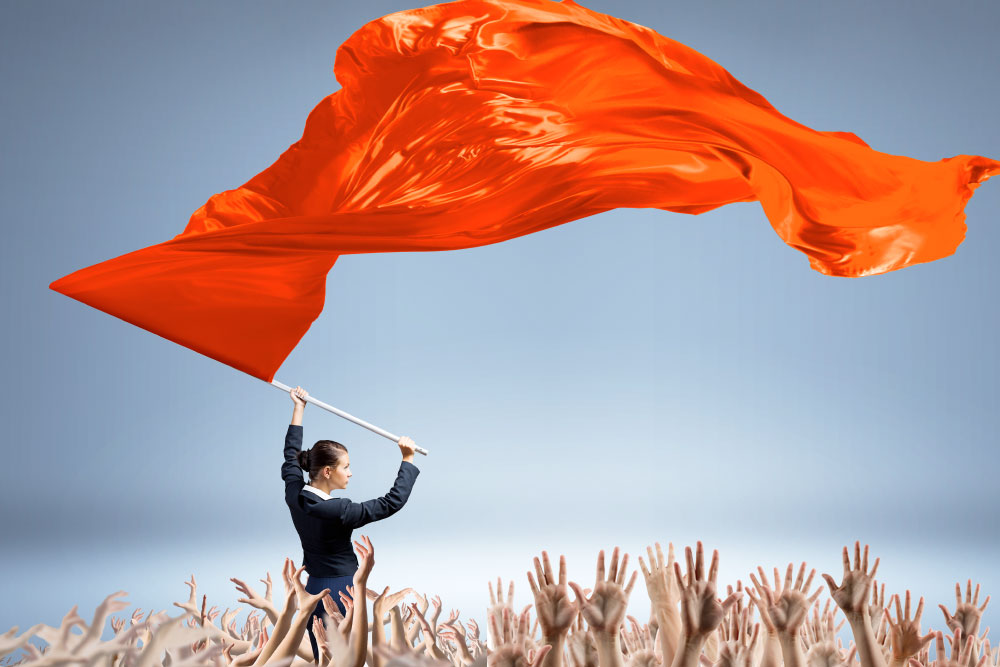 Women in India have travelled a long, meandering way in her entrepreneurial journey. Starting couple of decades ago as a saree or pickle seller from home, women have now moved on to earn their degrees first before embarking on her entrepreneurial journey. Earlier women used to start their own businesses to support families with some extra penny, but now it is more to establish a career and to make a mark.

In this Outlook Money Women’s Special edition we are featuring 13 such brilliant women who dared to take the challenge of starting their own business and followed their dreams.

The word entrepreneur is derived from the French term entreprender, which means a person who undertakes the task of bringing together various resources and manages them to achieve desired results and take some share.

Nothing worth having comes easy and the path to entrepreneurship is always strewn with lot of hurdles. More so, for women who are constantly trying to strike a perfect balance between work and life. Social taboos are yet another demon that women endlessly encounter on their way to being an entrepreneur. 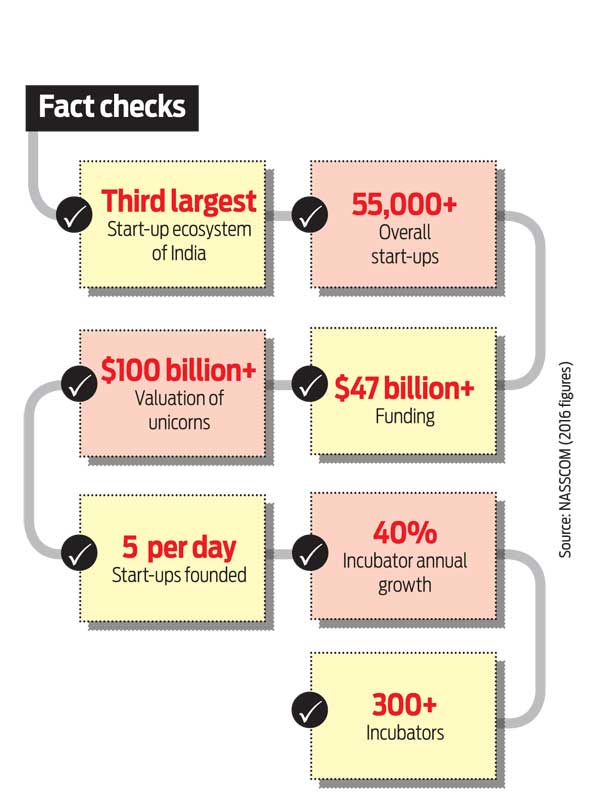 The risks of women entrepreneurship vary from perceptions or biases, which at times lead to them not being taken seriously to lower levels of self-belief about sustaining the business while balancing personal commitments.

Few other perils include the inability to raise capital funds often due to relatively limited business networking along with the still conservative social fabric full of biases that sometimes prove to be unnerving for women entrepreneurs, says Shalini Pillay, Office Managing Partner – Bengaluru, KPMG in India.

According to Startup India website women constitute only 13.76 per cent of the total entrepreneurs, which is 8.05 million out of the 58.5 million. Women-run establishments combinedly provide employment to 13.45 million people.

The number of women entrepreneurs may be less but overall, women comprise about 30 per cent of corporate senior management positions — notably higher than the global average of 24 per cent.

The overall median proportion of female executives in successful companies is 7.1 per cent, compared to 3.1 per cent at unsuccessful ones.

To give women entrepreneurship its required fillip, this March 8, the central government through its Startup India initiative in collaboration with select organisations across the country, is providing free co-working space for startups led by women. These startups will be able to work in a collaborative and flexible environment based on mutual trust between the organisations and entrepreneurs.

As a way to provide instant mentorship to aspiring women entrepreneurs, Startup India is also organising a speed mentoring session. Several panels will be set up and each panel will consist of four eminent women personalities: an investor, a government or industry official, a successful woman entrepreneur and a legal specialist.

The selected entrepreneur will receive an opportunity to spend 10 minutes with each stakeholder in the panel, hence receiving 40 minutes of dedicated interaction and facetime. The purpose of this interaction is to enable aspirants develop their skills and strategies and take their ideas to the next level.

Despite such external efforts to encourage entrepreneurship among the fairer sex, remonstrances are plentiful for women. The most colossal being – confidence, which is not limited just to them but also within their immediate environment including family, friends, clients, prospects and industry. Sharing her views on the perception of women entrepreneurs, especially the aspiring ones, Shweta Jain, chief executive officer and founder, Investography, a financial planning firm, says “They look at new women entrepreneurs either with amusement, thinking this won’t last and you will  lose interest or with bemusement, thinking what is she going to do? But it is up to us and us alone – to overcome this challenge. By doing more than we promise, by perseverance and sometimes just by smiling and moving on and not letting their lack of confidence in us affect us.”

According to the Mastercard Index of Women Entrepreneurs 2018, factors such as knowledge assets, financial access and cultural stereotypes are the primary reasons why women choose not to become entrepreneurs.

The gender gap in terms of knowledge assets and financial access remains a major roadblock that prevents women from becoming entrepreneurs. This component refers to the progress and degree of marginalisation faced by women as financial customers and academics in tertiary education enrolment. This impacts women’s inclination to seek loans or, alternatively, save for business.

“As per a recent analysis done by PwC, we found for over 61.48 per cent women, lack of funds was a significant problem. In the case of female non-entrepreneurs, 54.74 per cent indicated that lack of funds was the reason for their hesitation in starting an enterprise. With female entrepreneurs, 77.87 per cent took significant risks by employing their personal savings to set up their enterprises,” says Murali Talasila, Partner and Leader Start-ups,  PwC India. 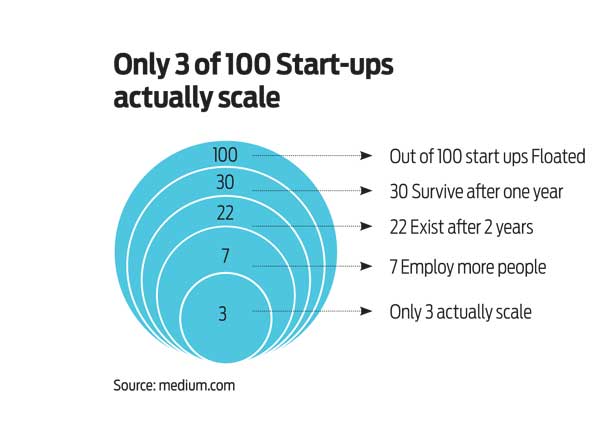 The Global Entrepreneurship Monitor India Report 2017-2018 stated  that women are less likely to pursue degrees in business, admin and law despite having the inclination to do so. Women’s secondary and tertiary education attainment rates reveal a greater disparity than primary education attainment rates. Further, women are less likely to pursue higher education and even when they do, they are more likely to stay away from management-related fields that could augment their entrepreneurial knowledge and build confidence.

Then what should women entrepreneurs do to have a better survival rate?

Renu Maheshwari, CEO and Principal Advisor, Finzscholarz Wealth Managers says do not compare yourself with men and capitalise on your strengths.

“Your presence in the business world is not to replace men or compliment men or anything to do with men. Your presence in the business world is because the world economy has changed from a feudalistic muscle-driven economy to knowledge and creativity-driven one. If you are intelligent and can apply knowledge, you are valuable to the world irrespective of the gender,” she further adds.

Maheshwari suggests that women need not be like a man to be a successful entrepreneur.

“Do not expect special privileges. Privileges are welcome but working around them cannot be the path to success. Entrepreneurship is about vision, creation and investing for future. Laws, subsidies, privileges, special schemes can only assist willing entrepreneurs but not create entrepreneurs,” she asserts.

Another important aspect to doing entrepreneurship successfully is not ignoring finance in business. Maximum women-owned businesses are creative in nature and women often get too occupied in the creative part and indirect costs gradually leading to troubles, which eventually pose as an impediment in the growth of the entrepreneur. Hence, seeking help from financial professionals in order to get the costing and profitability right is highly needed.

Self-belief and having a cracking-value proposition are fundamental to entrepreneurship; combined with the ability to build an effective scalable commercial model is the key to survival, says Pillay.

However, when supporting factors within the ecosystem happen to be biased, female entrepreneurs are more likely to internalise them and eventually succumb to the same.

“In our analysis, we saw a striking trend among women who felt pressured by family members to get married or to focus on domestic responsibilities. These gender roles are ingrained in the country’s culture and strongly correlated to women’s perception of failure. Our study demonstrated that 35.25 per cent of respondents believed that the fear of failure created an additional burden,” says Talasila.

Now, the question arises that with so many stumbling blocks at every step, what should women entrepreneurs do in order to consolidate their position under the sun?

Experts are of the opinion that Indian women deciding to take the less-trodden path of entrepreneurship   must take certain affirmative steps in order to not only survive but also gradually consolidate their position. Better awareness of existing government schemes specifically designed to help women entrepreneurs progress; becoming a part of the national dialogue on entrepreneurship and, in particular, on women entrepreneurs.

“By way of this, women can become more proactive partners in the decision-making process —the basis for policy framing. This would result in formulating more relevant policies, find a good co-founder with complementary skill sets, build or become part of a peer network that provides mentoring opportunities and also acts as a support system and work on core finance and technology skills,” says Talasila.

Becoming an entrepreneur is not the end of the journey, rather just the beginning.

Good leadership and strong entrepreneurship are based on fundamental tenets, which must have no scope for gender biases to creep in. Women should rise above pre-conceived notions and expectations, standing tall and confident.

Despite so many difficulties, what is worth noting is that the zeal to lead businesses has become more prominent among women in the recent times. The number of success stories have also shot up by leaps and bounds

“In today’s context, we are clearly witnessing a higher number of success stories, where women entrepreneurs are now inspiring the Gen X and this in turn is beginning to have a catalytic effect. Heightened awareness levels, a deeper appreciation of the benefits and hence imperatives of having a diverse workforce, are being translated into a growing number of women holding senior positions of influence in the corporate world too,” says Pillay.

Also, India Inc is providing the platform to acknowledge the leadership and entrepreneurship, which is also very encouraging and there is an increasing number of women taking the plunge into setting up their own ventures.

Having more autonomy has become a key factor for women to choose to become entrepreneurs. While the number of firms owned by women are growing at a faster pace (2.5 times the national average in the US), it has far from reaching its full potential. Although the autonomy and success of women leaders are pull factors, according to the National Women’s Business Council Report from 2017, sometimes entrepreneurship could be out of necessity, says Talasila.

However, is it so that women only excel in softer skills and the tough ones continue to be men’s forte?

Maheshwari says sectors related to art and creative fields found a lot more of women entrepreneurs than technical fields such as computer.

“Twenty-first century saw more women working out of the house. This created a demand for services, which were otherwise being taken care of by women at home. Food, play schools and day care is once such area. Food articles like pickles, papad is another one. Human resource and finance are another favourites among the services sector,” she adds.

According to the Sixth Economic Census by the Ministry of Statistics and Programme Implementation, the highest percentage of establishments owned by women are in agriculture and related fields, at about 34.3 per cent.

In the non-agricultural sectors, women-owned establishments are concentrated in manufacturing (29.8 per cent) and retail trade (17.8 per cent).

Women’s entrepreneurial expedition has just begun. Let us hope this International Women’s Day that women will curve out a niche for themselves in their entrepreneurial journey with courage, perseverance and wisdom.