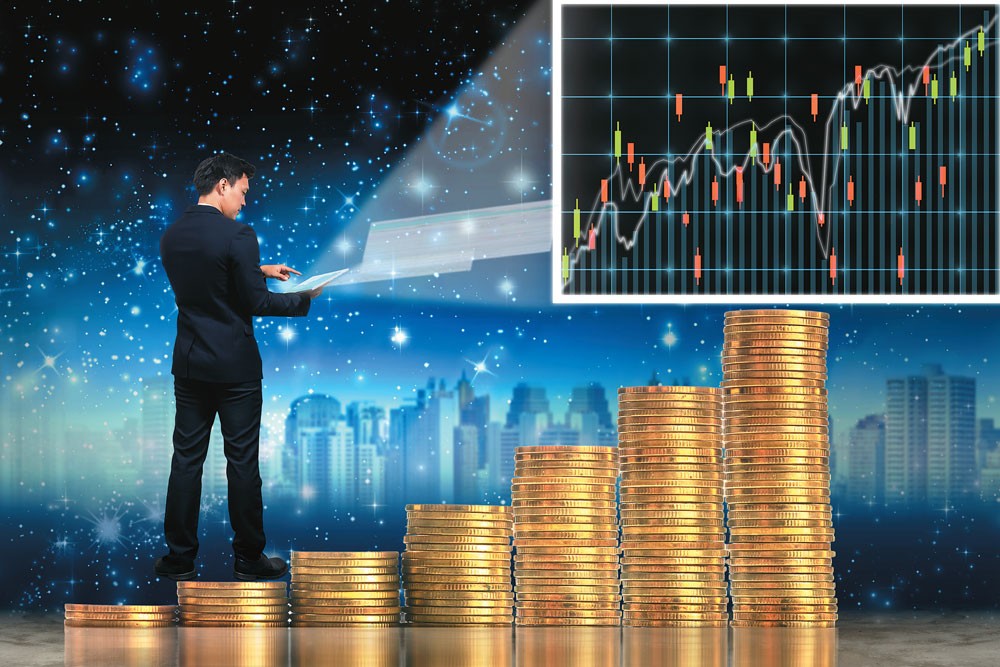 Investments in the capital markets are considered riskier proposition. Till date, it was true for all investments made in the equity shares and gained more significance when an investor decided to take a direct exposure in equity and invest on its own in listed equity company shares. These companies raise resources from various sources including banks and financial institutions. Sometimes, the promoters of these companies also need to raise resources to plough back in the company; this can be in the form of working capital requirement or increase  their holding.

For this, promoters pledge their holdings in the company either with banks, non-banking finance companies (NBFCs) and mutual funds; this being the most recent phenomenon, which has been observed and debated  everywhere in the capital markets.

Pledging of shares owned by promoters (of listed companies) to raise resources (funds) is an important matter. This should be considered as one of the critical items of the corporate governance checklist for the retail shareholder, who directly takes exposure  to the equity.

Leading rating agency CRISIL has recently released a report on the issue titled Covering The Pledge. The report highlights issues with respect to amount of debt raised by pledging promoters’ holding as collateral and how inadequate the cover is; resulting in swift value erosion in the depressed market, as equity is used as collateral and equity being  considered as inherently volatile.

According to the report, authored by Somsekhar Vemuri, senior director and Ramesh Karunakaran, director, CRISIL Ratings, borrowing based on the value of the underlying listed shares is an easy way of monetising a promoter’s ownership without ceding control. For, pledged-based transactions of promoters, risks are commensurate only at appropriate cover levels – a cover that is adequate enough, to withstand the equity markets’ risks should  be maintained. 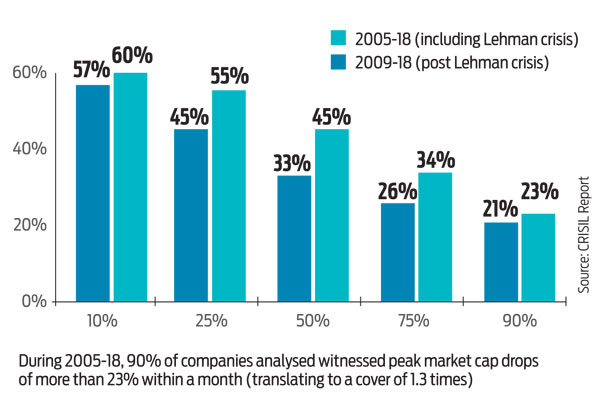 The report further stated, the cover should be assessed on the basis of overall concealment available through promoter holding –both pledged and unencumbered on all of the debt that the promoter has raised in various holding or investment companies, and not just on the basis of pledge and structure of a specific transaction alone. Other factors such as strength of the underlying company and management profile should also be taken into consideration. A detailed  discussion follows.

This is in sharp contrast to Reserve Bank of India’s (RBI’s) prescription of a minimum collateral cover of two times for lending against shares by banks and NBFCs. Roughly, 10 per cent of the debt has transaction cover of 1.3 times or lower, and provides for additional illiquid collateral (unlisted shares, real estate mortgage) to compensate for the lower cover. For ~30 per cent of the rated pledge debt, the pledged shares have to be liquidated within 10 days in order to recover debt and avoid a payment default following invocation, the report said.

Also, promoters would be reluctant to dilute their stake in the listed group companies to generate funds for debt repayment. The debt is, therefore, expected to be refinanced, backed by the strength of the market value of promoter holdings in listed companies. Any significant fall in value of the shares during the tenure may lead to high refinancing risk and eventual default.

In order to understand the kind of share price drops in the Indian market, CRISIL analysed companies listed in the Nifty 500 index. The price drop in a one-month horizon was chosen considering the typical time period prescribed in most transactions for liquidating shares following a pledge invocation. The two time periods chosen were from 2005-18 and 2009-18. The period between 2005-18 was considered as it included the Lehman crisis, a black swan event.

During 2005-18, 9 per cent of companies analysed, witnessed market cap declines of more than 23 per cent within a month. A 23 per cent price drop implies that if a shares-backed transaction had an overall cover (including both pledge and unencumbered shares) of 1.3 times to start with, in 9 out 10 cases, the market value of the shares could have dropped below the debt contracted within a month, leading to losses for debt holders. During the same period, half of companies having such transactions witnessed market capitalisation fall of more than 45 per cent, i.e., even a cover of 1.8 times could have been fully depleted within a month in the case of 50 per cent of companies.

During 2005-18, 90 per cent of companies analysed witnessed peak market cap drops of more than 23 per cent within a month (translating to a cover of 1.3 times)

Typical transaction cover levels do not provide sufficient cushion to absorb equity risk. For loan exposures backed by pledge of shares, RBI regulations require NBFCs and banks to maintain a minimum cover of two times (or a loan-to-value ratio of less than 50 per cent). This is the bare minimum and lenders are free to seek higher cover depending upon the quality of the collateral.

However, certain pledge-backed debt, especially capital market instruments, may be raised at transaction covers lower than two times as well. Indeed, around 90 per cent of the rated pledge debt of ~Rs38,000 crore had cover less than 2 times – even as low as 1.2 or 1.3 times. Considering high equity volatilities, low covers of 1.2 or 1.3 times may not be able to provide adequate cushion and avert a default on the debt.

While NBFCs and banks have capital cushion to absorb risks as per regulatory capital adequacy norms, others do not have any  such leeway.

Given that the transaction cover requirements may not suffice to cover the equity risks, lenders create “structures” to protect against the market-related risks.

The structure requires promoters to top up the cover in case it falls below the minimum levels. For this, a promoter needs to have sufficient headroom with a reserve of unpledged shares. However, roughly 25 per cent of over Rs2 lakh crore worth of listed shares pledged by promoters in the market belong to companies whose promoters have pledged 60per cent or more of their holdings, which limits their ability to pledge additional shares.

Market does not have the depth to ensure orderly exit by lenders in case of liquidation of shares.  In case promoters do not have the ability to top up, the structures envisage certain timelines to avoid a payment default through sale of shares in the market. The typical timelines are less than 30 days. Around 90 per cent of the rated pledge debt analysed in the report provided less than 30 days to liquidate the shares, with approximately 30per cent envisaging less than 10 days. The timelines envisaged in the structure should be a function of the liquidity in the market to ensure orderly exit without any steep impact cost. However, the liquidity in the Indian market is insufficient to provide an orderly exit in less than 30 days. 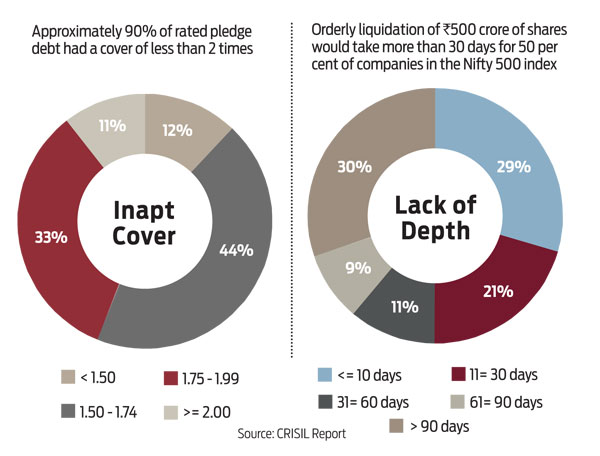 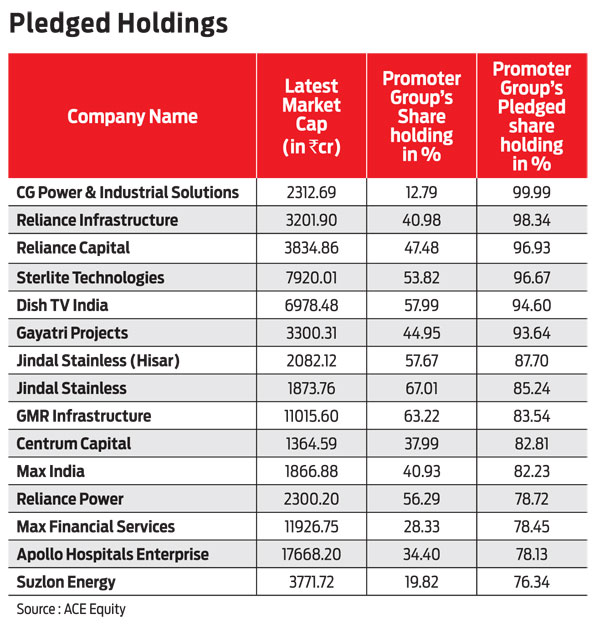 The actual quantum of pledged shares that can come up for liquidation may be much higher. This is because pledge transactions of a promoter group are not restricted to just one lender. While it is possible that lenders can dump these shares and exit within a shorter time span, such a hasty act may lead to a dramatic fall in share prices, due to which they may not be able to cover the value of debt.

Commenting on the same, Somsekhar Vemuri, senior director, CRISIL Ratings said, “As far as retail investors’ exposure in an operating company is concerned, whose promoter has pledged his own shareholding to raise debt, the investors need to track the disclosures required to be made by the promoters with respect to their pledge. This is a regulatory requirement, which every promoter has to comply with. If the amount of pledge is high and if the share price of that particular company is under pressure in the market than the lenders who have given loan to promoters against the pledged shares will rush in to minimize their loss and in that event the investor who does not track the share price on the day to day basis may witness significant value erosion in their investment. Secondly, you may see the promoter may losing control of the company”.

Legal and practical risks may impede the effectiveness of pledge-based transactions. Enforceability of the pledge of shares has been called into question in the past due to both legal and practical challenges.

A case in point is Unitech, where the promoters stalled the move by the debenture trustee to sell pledged shares by securing an injunction from the court on the ground that the company would suffer irreparable loss if the stay was not granted. Such actions raise doubts about the ability of the trustee to liquidate the collateral when triggers are breached.

Promoters typically indulge in multiple pledge transactions with several lenders to raise the desired quantum of debt. There have also been instances of promoters losing control of their operating company due to invocation of pledge of shares, as was the case in Great Offshore. In many other cases, the promoters are on the brink of losing control.

To steer clear of such episodes, lenders may, in consultation with promoters, arrange for a standstill agreement and stay the share sale on the breach of covenants. If the practical enforceability of the structure is ambiguous, and only limited protection can be provided by the cover, then how should the credit profile of promoter debt be assessed?

Credit profiles should be assessed based on the overall cover available and its capacity to withstand market stress. The overall cover available through promoter holdings (both pledged and unencumbered) on the overall debt that the promoter has raised in various companies should be the determinant of the credit profile of the promoter debt, rather than the pledged shares and the structure of a specific transaction alone.

The overall cover should be high enough ab initio to ensure that the transaction is able to withstand medium-term share price drops during its tenure.

Strength of underlying company and management profile should be centrally factored in this case. The strength of the underlying company whose shares are pledged, in terms of its business and financial profile, cash flow stability, and market capitalisation, influences its share-price volatility and liquidity. Any stress in the operating company can lead to a drop in its share price, thereby affecting the cover.

The management quality of the promoter group factors their adherence to prudent debt levels and ability to preserve the value of the operating company.

So, at the end, if investors like banks and NBFCs have to remain alert, as analysed in the CRISIL report, just imagine the level of caution that the retail investor has  to exercise!

Signs Of Being Debt Trapped