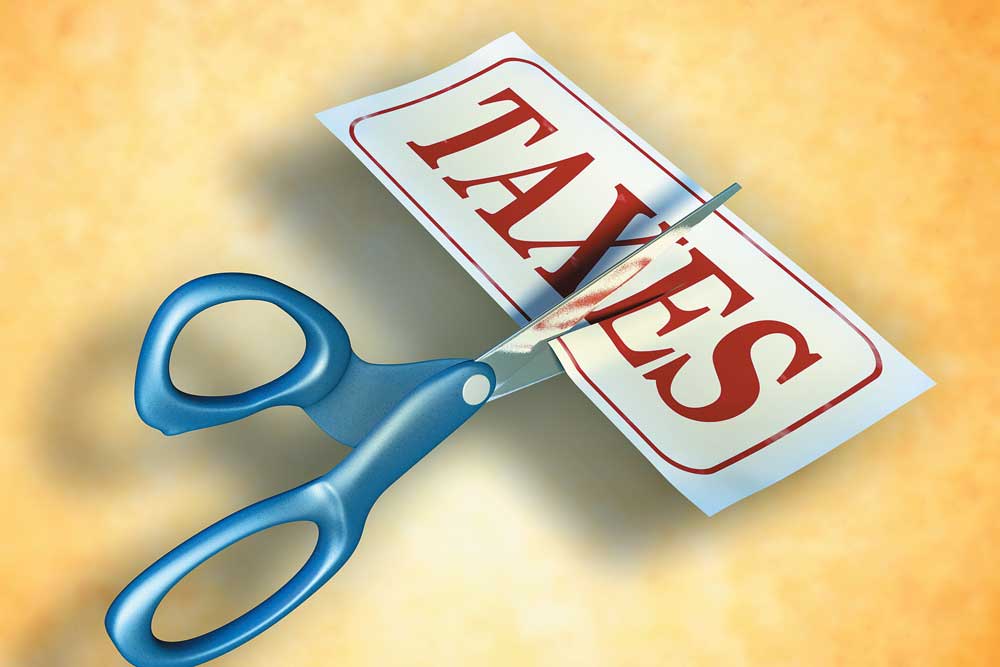 There were wide expectations leading up to the announcement of the Union Budget for the next fiscal that Finance Minister Nirmala Sitharaman would provide relief to salaried taxpayers, like she did to corporates a few months ago. For quite some time now, the government has also been hinting towards simplification of the income tax regime in India to make compliance easier and also to bring more people under the tax net.

Two hours into the budget speech, the FM finally came to the widely anticipated subject and announced a series of changes and reductions in the Personal Income Tax slabs. As per the government estimates, the new personal income tax rates, which would bring “substantial benefits” for the taxpayer, will entail estimated revenue forgone worth `40,000 crore per year for the government.

However, as the finance minister kept listing the details, it became apparent that the new income tax regime would be optional and those who opt for it, would have to forego majority of exemptions and deductions that they avail under the current regime.

This, of course, makes matters more complicated compared to a simple rate rationalisation. Here we try to explain what the new income tax regime means, what benefits it brings for the taxpayers, who should opt for it, and who should stick to the old regime with all its exemptions and deductions.

The new income tax regime introduces new tax slabs with lower tax incidence in each of them while also increasing the threshold of the highest tax slab of 30 per cent to income beyond Rs15 lakh. Earlier, taxable income beyond Rs10 lakh was taxed at 30 per cent. It makes no changes to the two slabs below Rs5 lakh. So income up to Rs2.5 lakh remains tax-free and that between Rs2.5 lakh and Rs5 lakh would keep getting taxed at 5 per cent. Of course, for those whose income does not exceed Rs5 lakh, they would get exempted from paying any tax despite falling in the 5 per cent slab. The 5 per cent rate would only apply to those whose income is beyond Rs5 lakh. This continues to be so in both regimes. 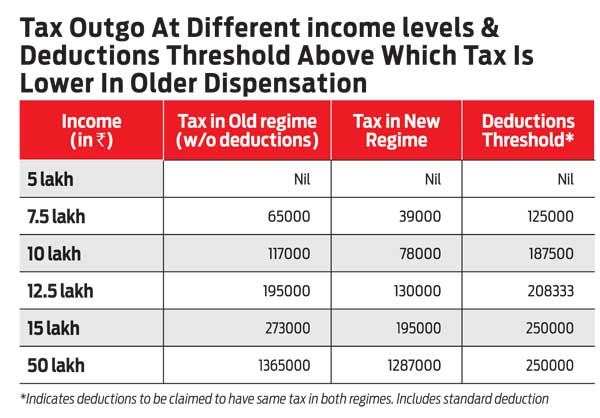 However, income between `5 lakh and Rs10 lakh, which in the earlier regime was taxed at 20 per cent, would have a significantly lower tax incidence under the new regime as this slab has been divided into two new slabs – Rs5-7.5 lakh and Rs7.5 and  Rs10 lakh. So under the new system, income between Rs5 lakh and Rs7.5 lakh would be taxed at 10 per cent while income between Rs7.5 lakh to 10 lakh would be taxed at 15 per cent. This translates to reduction in tax liability of roughly Rs22,500 for those with Rs7.5 lakh income and Rs37,500 for those with `10 lakh income. However, the catch is that they would have to let go of all deductions and exemptions – including the standard deduction, HRA benefit, Section 80C and 80D deductions as well as deduction available on home loan interest under Section 24 of Income Tax Act. So depending on how much each individual saves and invests in tax-saving schemes, and whether the taxpayer has taken a home loan, the effective savings under the new regime would be much lower.

For example, someone with an income of Rs7.5 lakh, who claims the entire `1.5 lakh deductions available under Section 80C, will have to pay Rs37,500 under the new regime (excluding cess) as opposed to only Rs22,500 in the old regime. This means that instead of saving tax, the taxpayer would have an extra tax liability of Rs15,600. This would become even higher if the individual is claiming deductions under other sections as well. This is because of the fact that in the old regime, after claiming deductions, the taxable income itself becomes lower. So, even a higher tax rate on a lower income base resulted in lower tax liability.

Regarding income above Rs10 lakh, which is taxed at a flat rate of 30 per cent under the old regime, the FM has created three new slabs: Rs10 to Rs12.5 lakh, Rs12.5-15 lakh, and above Rs15 lakh. While income between `10 lakh and `12.5 lakh would be taxed at 20 per cent, income between `12.5 lakh and `15 lakh would incur tax rate of 25 per cent. All income above Rs15 lakh would be taxed at 30 per cent. Without taking into account any deductions, this essentially means a saving of roughly `62,500 for those with Rs12.5 lakh income and Rs75,000 for Rs15 lakh income. This would go up to Rs65,000 and Rs78,000 respectively after including cess. However, since one would have to let go of all deductions and exemptions, the actual impact would be much lower and in certain cases, could even lead to a higher tax outgo. 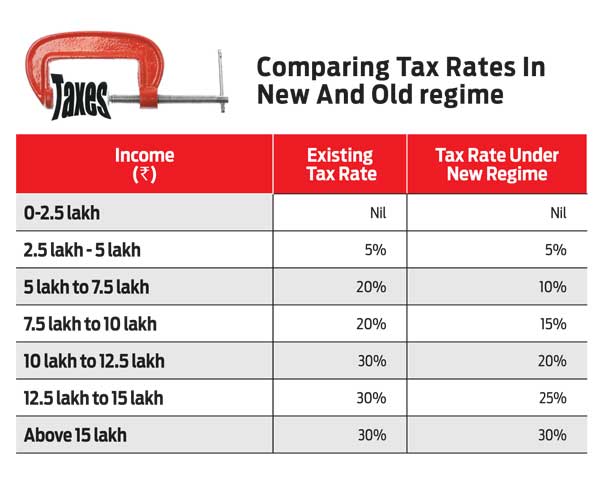 According to Homi Mistry, Partner, Deloitte, one would have to do a comparative analysis in each individual’s case. He says that there’s no hard and fast rule regarding who should switch to the new regime and who should stay in the old regime.

“It depends on case to case. Supposedly, if a person has never claimed those benefits or allowance, then depending on his income slab up to Rs15 lakh, the person should benefit. For instance, if you are earning Rs15 lakh and go into the new regime but not claiming the deductions, you could save oddly about Rs78,000,” he says.

“But it is possible that he or she may be claiming deductions and may more or less come back to the same limit. I would say it would be very fact specific. You will have to see each individual’s income, what were the items of income, and what kind of deductions are you claiming,” Mistry adds. 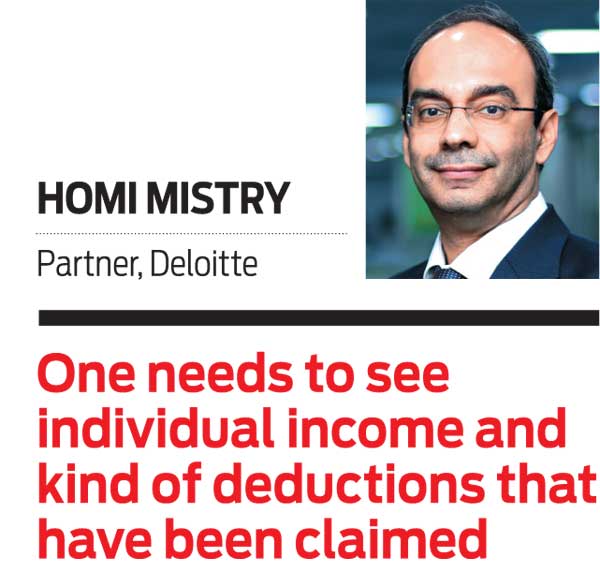 Suresh Surana, Founder, RSM India, says that without the exemptions and deductions, the new individual scheme may only be attractive for persons not having any major savings or housing loans.

“Individuals opting to pay tax under the proposed new regime for personal income tax will have to forgo almost all tax deductions and exemptions which they were claiming in the current tax structure. The tax deductions which would not be available include Section 80C (Investments in PF, Long-Term Bank Deposits, Life insurance premium, NSC), Section 80D (medical insurance premium), tax breaks on HRA and on interest paid on loan for self-occupied house property, donations, etc,” he explains.

He says that since the scheme is optional for the taxpayers, it may be worthwhile to work out the tax liability under the old and new regime and then take an appropriate call for the same.

Surana also adds that the surcharge and cess have been continued as a result of which the effective tax rate can be 39 per cent or even 42.7 per cent in the new system as well. 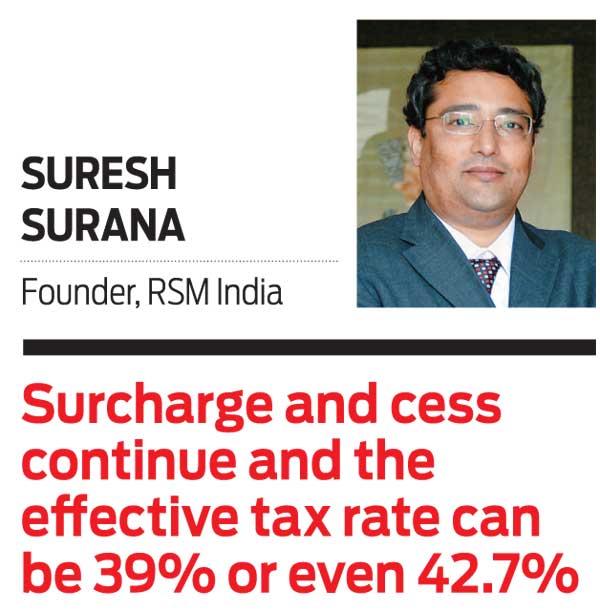 According to Niranjan Hirandandani, President of Assocham, people will jump into the new regime if they haven’t taken any benefit of taxation.

“Many of the salaried people who haven’t taken the deduction will be the biggest beneficiaries. Those who have already got housing and other deductions taking place will obviously not get much benefit,” he says.

There are endless permutations and combinations of threshold levels of tax-saving investments at which it would make no difference if one switches to the new regime. However, as per rudimentary calculations, if one claims deductions of over Rs2 lakh under different sections (excluding the standard deduction of Rs50,000 which is available to all), the new reduced tax rates will not bring any benefits. Of course, this threshold becomes lower depending on the income level. For example, those with income around Rs7.5 lakh would benefit only if they claim deductions lower than Rs75,000. 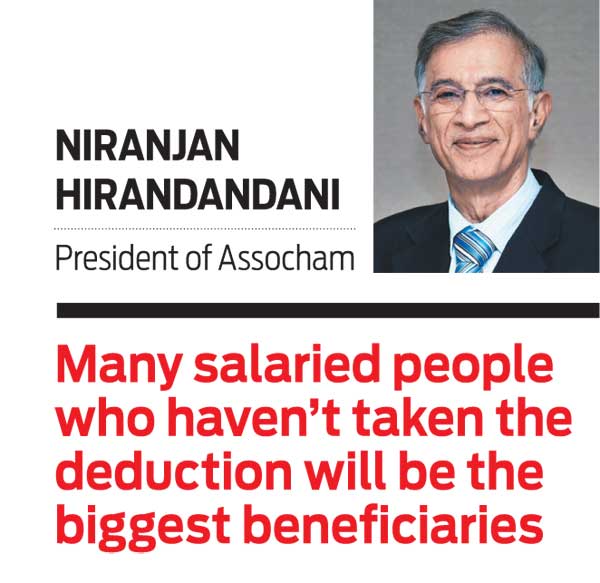 In her budget speech, Sitharaman said that the tax proposals will introduce reforms not only to stimulate growth, but also to simplify tax structure, bring ease of compliance, and reduce litigations. So a genuine question arises here whether through the introduction of this new regime of taxation, the system would be simplified and easier to comply. If looked at in isolation, this budget proposal, in fact, complicates an already complicated personal income tax system.

“The new tax regime shall be optional for the taxpayers. An individual who is currently availing more deductions and exemptions under the Income Tax Act may choose to avail them and continue to pay tax in the old regime,” the finance minister said.

This essentially means that the move has brought one more element of complexity into the system not only for the taxpayer, but also for the Income Tax Department.

According to HDFC Chairman Deepak Parekh, the first time in the last 25 years the country has had the most complex rate structure with two rate structures for individuals and they can opt between the two. Moreover, India has similar two regimes for companies as well and one can choose either of them.

Being optional, it means that some taxpayers would calculate and file their income tax as per the new system, while others would file it as per the old system. The two kinds of income tax returns would have to be assessed in completely different manner as well. 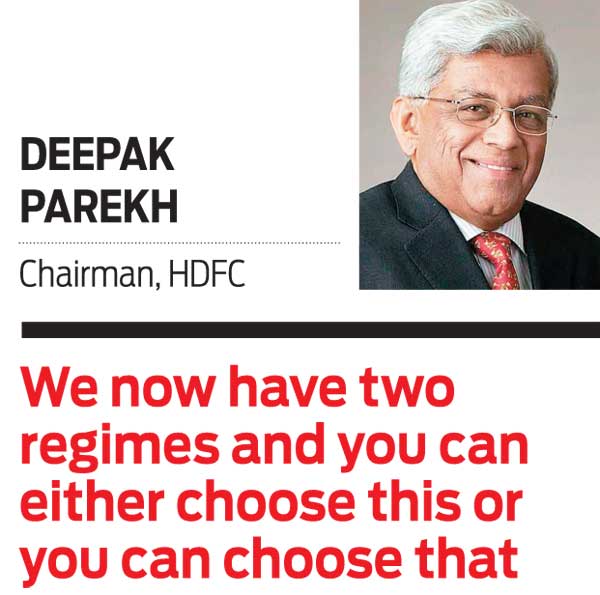 One level of complexity for the taxpayer would be to figure out which system is more beneficial. Second, if it is to be believed that once a taxpayer switches to the new system, she cannot switch back (as has been the case for corporate tax), one not only has to see whether the new system benefits this year, or would continue to stay beneficial as one starts saving and investing. This would need a significantly higher level of tax planning.

Youngsters who will enter the job market in the near future, or did so recently, would surely find it easier to opt for the new regime as they will not have to make any significant investments to save tax, and also because their income tax return would be pre-filled if they opt for the new regime. However, once they start investing, take life and health insurance, or take a home loan, they would find themselves in a position where they are paying more tax compared with someone with the same salary and same investment portfolio, but who remained in the old tax regime.

However, the finance minister has also clarified that the intention of the government is to eventually switch to the new system with no exemption, deduction and lower tax rates. Until that happens, this duality of the system may create further complications going forward.

(With inputs from Dipen Pradhan)

A Smart Way To Declutter Finances