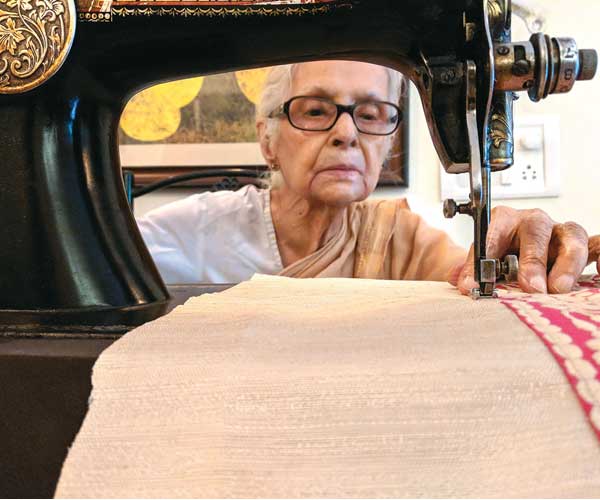 Age is just a number when it comes to following your passion, and there’s no better example than Latika Chakravorty, a resident of Kolkata who started her own venture at the ripe age of 89!

Chakravorty was brought up in a small town in Assam, and was quite meritorious in studies. Upon being married to an employee at the Survey of India, she got an opportunity to travel extensively across the length and breath of the country.

Later, upon her husband’s demise Chakravorty continued with her travels, thanks to her son’s employer, the Indian Navy.

Experiences gathered around these journeys, eventually formed the basis of her current venture. During her travels she collected different types of fabrics from all over. Since every piece of cloth had an element of nostalgia, she decided to convert them into beautiful potli bags.

Chakravorty discovered her flair for sewing at an early age. Her sewing machine have been her constant companion for over six decades now. “Earlier, I used to stitch clothes for my children, especially when they were young. Later, expanding to other items, I started making dolls. Four years ago, just like that, I started making ‘potlis’. Back then, I did not realise that one day they would become so popular,” says the entrepreneur.

Chakravorty discovered her talent of upscaling vintage sarees into bags, when her daughter-in-law requested her to design a bag to match with her saree. Since then there has been no looking back.

Fortune came knocking at the door when her grandson visited from Germany. Amazed at his grandmother’s exceptional talent, he felt that her hard work must be recognised. The forward-thinking grandson, went on to design a website to showcase Chakravorty’s works backed by social media marketing.

“The business is managed by my son and grandson. And my daughter-in-law helps me with all the work including taking orders. It gives me immense pleasure and a sense of fulfilment to see my creations sell,” adds Chakravorty.

Over time, her business has expanded and garnered lots of appreciation from all over the world. “I am surprised by the response. Within a short time-span people from USA, Germany, UK, Spain, New Zealand and Oman have bought several potlis.” Chakravorty believes  leading a   disciplined life  has kept her healthy and peaceful. Her message to the younger generation: “Age is not a bar to do something good.”

From Dancing Diva to Marketing Monarch