A vacation in Vancouver

In October 2015, taking full advantage of the sabbatical I have taken from the humdrum of politics, my wife and I decided to take a long holiday abroad. We had heard that Vancouver, on the west coast of Canada, is one of the most beautiful cities in the world and we decided to begin our trip from there. We took a Lufthansa flight from Delhi to Frankfurt, and from there boarded a flight to Vancouver. The plane flew over Alaska and the Rocky Mountains, with their craggy and snow-capped peaks.

It was almost evening by the time we reached our hotel but darkness fell only around 9 p.m. We had ample time to unpack, take a shower and go for a walk. The weather was warm and pleasant, the sky cloudless, and people walked around in light, summer clothes. 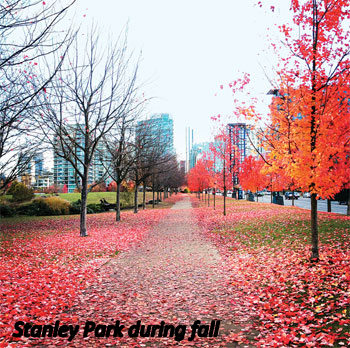 But the pleasant weather did not last long. The next day turned out to be cold and cloudy. So, we took out our light woollens and decided to explore the neighborhood. Right across the street, facing our hotel, was the impressive Vancouver Public Library building, designed like the Colosseum in Rome. My wife, being an author of books for children and young adults, was immediately attracted to it. In front of the library, tall pillars rose towards the sky ending in a glass ceiling that allowed sunlight to seep through, making it look bright and cheerful. The small cafes lined to one side were crowded with students. A number of activity zones, play centres, and chairs and tables were arranged inside. Young kids, toddlers and even babies were enjoying themselves. It was warm and informal, with parents reading aloud to the eager new readers.

While my wife browsed through the books in the children’s section, I spoke to the librarian and 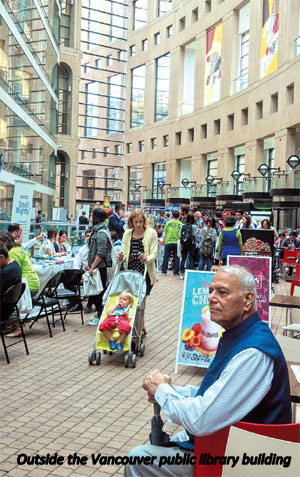 inquired if they had any books from India. What they had was mainly folklores and fairy tales. There was just one book by Ruskin Bond, titled Tales and Legends from India. Publishers like Tulika were represented in the Hindi section. But my wife was disappointed not to find any books by Indian authors of contemporary children’s literature.

We had been invited by the Consul General of India for lunch and we headed to an Italian restaurant on Robson Street, a popular and busy street in the city. Most official visits to Canada are confined to Ottawa, Montreal and Toronto. Some Indian professionals who we met during our lunch felt that there should be more official visits to Vancouver.

We spent the afternoon driving around and savouring the atmosphere of the city. With the combined beauty of the mountains and the sea, Vancouver is sprawling, laidback, and a very green city. It was established as a city in 1886, when the first transcontinental train arrived here and the city was named in the honour of George Vancouver, an officer in the British Royal Navy. The city even mirrors the architecture of Europe. In the evening, we walked the streets, browsed through some shops, and later settled down to a fish and chips dinner in one of the street-side eateries. We savoured not only the food but also the flavour of the place. It was fun being free and anonymous. 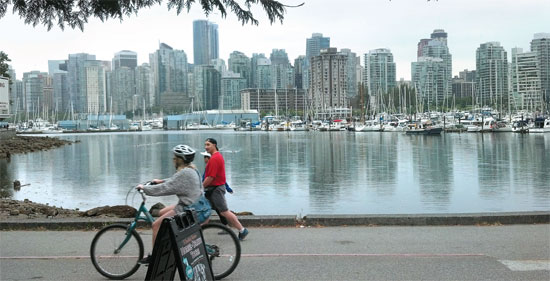 View of the city from Stanley Park

The best way to see a city is to take a guided bus tour. Fortunately, in Vancouver, you have many such tours to choose from. The concierge of the hotel advised us to take a certain hop-on, hop-off service with one of its stops near the public library, just opposite our hotel. We decided to take this bus ride on our third day in Vancouver. We walked to the bus stop in the morning and purchased our tickets. Soon enough, the bus arrived, and we hopped in and occupied seats at vantage positions. The driver also turned out to be the trip guide, and an excellent one at that! He explained the importance of each place to the tourists and stopped the bus long enough for quick visits; those who wanted to stay longer could take the next bus.

The journey took us to famous city sights like Chinatown, which is one of the earliest settlements in Vancouver. The Chinese had come 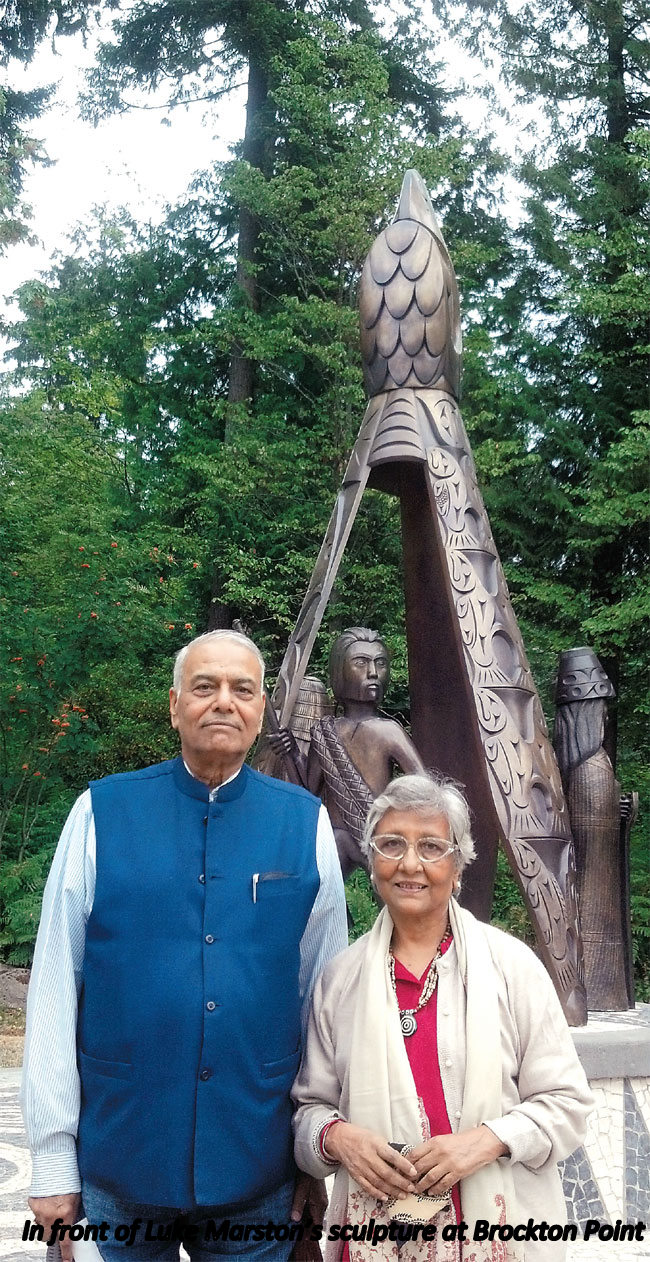 to work on the Canadian Railways and stayed on to form an important part of the city milieu. In fact, Vancouver is the second most popular destination for immigrants in Canada after Toronto and has its own Little Italy, Greek town, and Vietnamese and Korean areas. There is a substantial population of Punjabis who are also known as Indo-Canadians. Chinatown’s Millenium Gate stands at the entry point to the Chinese area. A beautiful, walled classical Chinese garden, named after Dr Sun Yat-Sen, and the restaurants are the highlights of this area.

Gastown is the oldest part of the city. Restaurants, galleries and shops line its cobblestone streets, making it a charming tourist attraction. It has a steam clock that puffs chimes powered by steam every 15 minutes. We passed the Granville Island Market famous for its fruit, vegetable and seafood stalls. Young, budding artists display their paintings just next door.

The journey across the CapilanoSuspension bridge was memorable. A 70 metre deep canyon divides Vancouver into two parts. The bridge, built in 1889 and a marvel of engineering, connects the two parts. The bridge sways when traffic moves. Its height and its swaying movement give one an eerie feeling.

The city’s geographic location makes Vancouver an ideal place for gardens. In fact, it is a city of gardens, the most famous being, of course, StanleyPark. Spread over 1,001 acres, the park is a natural, lush green rain forest We hopped off the bus when we reached the park and took a special tour in a horse-drawn carriage. It was a unique experience. The carriage seated about twenty people. The driver was a girl well-versed not only in giving instructions to the horses but also in narrating the story of StanleyPark.

The park had ancient redwood trees and a wide variety of plants and wildlife. Some trees were centuries old. Devastating cyclones had caused heavy damage to the trees thrice in the past many years, the latest storm being in 2006. Many of the fallen trees were still lying on the ground though the process of natural regeneration had started. The park boasted of a huge rose garden, many eateries, and totems that had been created by what the Canadians call the First Nation – the original people who inhabited the land. These totems, of various sizes, were hewn out of wood and painted, making them a colourful sight at Brockton Point.

There was also a statue of poet Robert Burns, runner Harry Jerome and of the Girl in a Wetsuit. There was also a memorial for the victims who died in the Air India Flight 182 ‘Kanishka’ bomb blast.

Our driver whipped the horses into a canter on the home run. They were then rewarded with sugar candies and we were also allowed to pat the animals gratefully as we bid them goodbye. 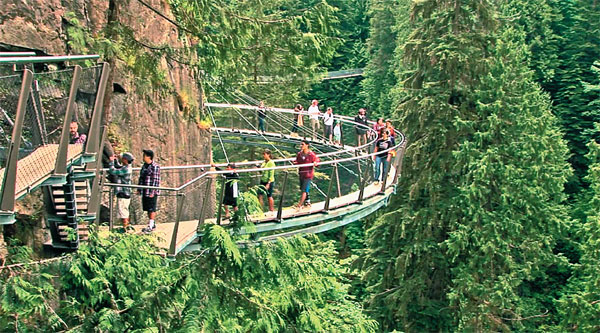 At the Capilano suspension bridge

The bus stop was close by and the bus arrived soon enough for us to resume our journey. It drove us past the elite residential areas along the waterfront. We traversed some other parts of the city and finally reached our stop near the public library. It was a worthwhile trip.

Later that evening, we strolled out for dinner to a Vietnamese restaurant nearby. We were warmly welcomed by the staff and were served delicious, piping hot food. Another interesting day had come to an end. Early next morning, we boarded a cruise ship bound for Alaska from Canada Place, a bustling harbour for cruises bound for various destinations. But that is another story.

The writer is a former external affairs and finance minister.

Realising Wanderlust Dreams within a Budget